Among the key figures at the forum to discuss Australia's dwindling fortunes and its remedies were Justin Langer, Greg and Ian Chappell, Ricky Ponting, Tom Moody and all the state coaches. 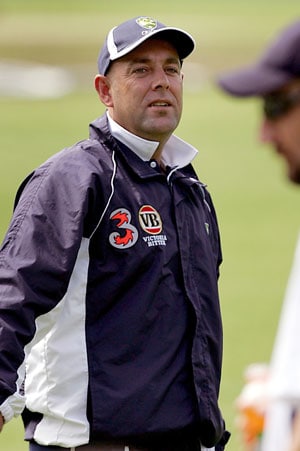 Coach Darren Lehmann gathered some of the country's top cricket minds Thursday to discuss ways Australia can improve their batting before the return Ashes series against England starting next month.

Lehmann talked for over four hours with a group of 20 former Test stars in Sydney to seek solutions to the Test team's batting inconsistency.

The Australians lost the Ashes series in England 3-0 in July-August. They are desperate to put Alastair Cook's tourists under pressure from the moment the first Test starts at Brisbane's Gabba ground on November 21.

Among the key figures at the forum were Justin Langer, Greg and Ian Chappell, Ricky Ponting, Tom Moody and all the state coaches.

Lehmann said improving the ability of Australian batsmen to occupy the crease for long innings was part of the agenda.

"It's just an overview from my point of view," he told reporters. "I wanted to get the views of some former greats of the game, talk about batting for four hours.

"I don't profess to know everything about batting. These guys have played a lot more Test cricket than I have so why wouldn't we ask about where we going?"

During this year's failed Ashes campaign in England, Australia chopped and changed batsmen and their position in the order on a Test-by-Test basis.

However, Lehmann said he was confident there would be more stability in the five-match return series, with selectors to "pick and stick" and ensure batsmen did not need to be looking over their shoulder after one poor showing.

"I think we'll be pretty consistent with who we want and the positions they're going to bat," he said.

Lehmann has stayed home from Australia's current limited-overs tour to India to monitor the progress of players in the domestic one-day cup and also to plan the return series against England.

The change in policy means the quicks for all five Tests against England will come from a pool of eight already identified by selectors but at this stage not made public.

The mini-squad of eight bowlers will remain the same throughout the Australian summer except for when players break down or return from injury, CA said.

Mitchell Starc, James Pattinson and Jackson Bird are currently out with injuries.

Comments
Topics mentioned in this article
Cricket Ian Michael Chappell Gregory Stephen Chappell Thomas Masson Moody Darren Lehmann Justin Langer Ricky Ponting
Get the latest updates on ICC T20 Worldcup 2022 and CWG 2022 check out the Schedule, Live Score and Medals Tally. Like us on Facebook or follow us on Twitter for more sports updates. You can also download the NDTV Cricket app for Android or iOS.