Domestic record-setting batsman, Amol Muzumdar on Tuesday endorsed the new Ranji Trophy format featuring all teams in three groups - A, B and C - and points system along with a host of cricketer-turned coaches. 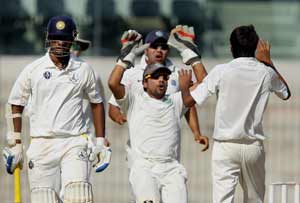 Domestic record-setting batsman, Amol Muzumdar on Tuesday endorsed the new Ranji Trophy format featuring all teams in three groups - A, B and C - and points system along with a host of cricketer-turned coaches.

"In my 20 years of playing first class cricket, I have seen the format undergoing three changes since 1993-94. In the older formats, the Ranji season used to extend longer but in the current format it has been condensed into 2-2 1/2 months. If you are out of form or unfit at the beginning then you have had it," he said.

"It's a good format as it gives six points for an outright win and a bonus point is also available (for victory by an innings or by 10 wickets)," said Muzumdar at a seminar organised by the Sports Journalists Association of Mumbai. Muzumdar, who said the introduction of SG brand of balls in domestic cricket has made a big difference, raised a point about weather-shortened matches in the north east region of the country from his experience of playing for Assam for two seasons before returning to try his luck with Mumbai from this year.

"In Assam, matches invariably used to start at 1030 am (scheduled start is at 0930 am) and end at 3 pm (scheduled end 4.30 pm) because of poor light conditions," said Muzumdar, who has qualified to play for Mumbai this season after serving a one-year cool-off period.

"The new format is good but the only regret is international players would not be playing because of the tight (Indian) schedule. The points system is also quite good as it will encourage outright wins," Kulkarni said at the seminar.