Wayne Parnell, the South African cricketer who was named in a preliminary report by the Mumbai police for taking recreational drugs at a rave party in Mumbai during the 2012 Indian Premier League in May, is unlikely to be punished. 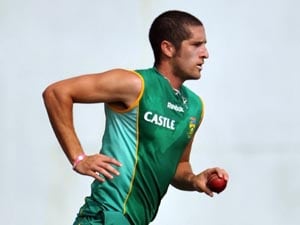 Wayne Parnell, the South African cricketer who was named in a preliminary report by the Mumbai police for taking recreational drugs at a rave party in Mumbai during the 2012 Indian Premier League in May, is unlikely to be punished.

"To take action against Wayne will be next to impossible at the moment because the whole process over there (In India) has been shambolic," said Jacques Faul, Chief Executive of Cricket South Africa, to Supersport. "The police are talking to some sections of the media but not to the cricket boards. The whole testing procedure was not done according to the standards that normally apply in sport and Wayne would be able to contest any action we take with absolute ease."

Parnell and Rahul Sharma, the Indian legspinner who played for Pune Warriors in the IPL, were detained by the police before being let out on bail. Despite testing positive, both players maintained their innocence, claiming to have been at the "wrong place at the wrong time."

While the Board of Control for Cricket in India (BCCI) didn't issue a formal reaction to the news, N. Srinivasan, the BCCI president, was quoted by sections of the media as saying that no "hasty decision" would be taken. "I don't know why everyone is in a mood to execute Rahul Sharma without even going into the details. The BCCI will first procure each and every bit of relevant information and then study them before deciding on the course of action," said Srinivasan to Press Trust of India, after the test reports came out in June.

Sourav Ganguly, the Pune Warriors captain in IPL V, also came out in support of Rahul. "I don't think it was a performance enhancing drug for which he should be punished. I think it was of those strange incident, one unfortunate incident which should not cost him his India place," said Ganguly.

Rahul is part of the Indian squad currently on tour in Sri Lanka. He featured in the third One-Day International in Colombo, but has been left out for the other three matches played so far.

Comments
Topics mentioned in this article
Cricket Sourav Ganguly South Africa Cricket Team Wayne Parnell Rahul Sharma
Get the latest updates on ICC T20 Worldcup 2022 and CWG 2022 check out the Schedule, Live Score and Medals Tally. Like us on Facebook or follow us on Twitter for more sports updates. You can also download the NDTV Cricket app for Android or iOS.