A US-based Pakistani cricket fan spent much of his marriage functions watching a match being played in Australia. 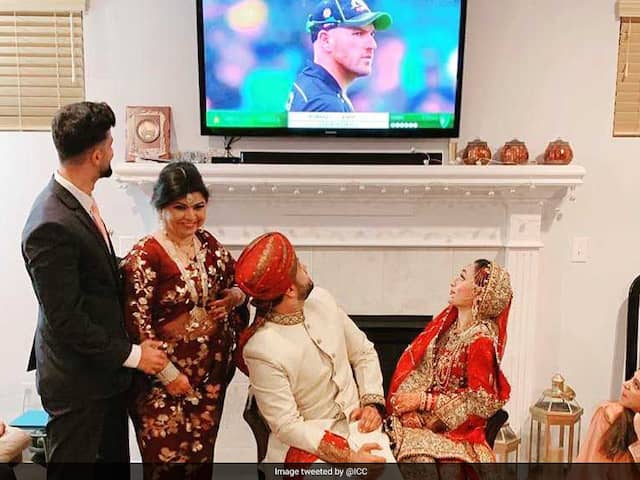 Hasan Tasleem sent a picture of his wedding day to the International Cricket Council.© Twitter @icc

Cricket isn't just a game, it's a way of life in the Indian sub-continent. Fans might go and get settled anywhere in the world, but they don't leave cricket behind. Just like India, fans in Pakistan are equally passionate about the sport. Every victory is celebrated as a festival, while each loss is hard to get over. A cricket fan from the United States of America, Hasan Tasleem, sent a picture of his wedding day to the International Cricket Council (ICC) and the sport's governing body could not help but share it on their social media handles. In a note attached with the picture, the fan wrote that he and his bride did not let their wedding stop them from watching Pakistan cricket team play. Soon after getting married, they watched a Twenty20 International (T20I) between Australia and Pakistan.

Hasan Tasleem, who lives in Detroit, Michigan, added that his bride was welcomed to the family with a traditional ceremony, but the couple could not take their eyes off the television as a cricket match was going on in Australia.

The fan also revealed that he had stayed up on countless nights to watch Pakistan in action against other teams as well. Touched by the fan's love for the sport, ICC took to Twitter to share the note written by Hasan Tasleem and a picture of him watching the game with his family.

You know it's love when ... pic.twitter.com/4YuGImuXjW

Pakistan are currently on a tour to Australia, where they trail the three-match T20I series 0-1, with a match to spare.

Steve Smith starred with an unbeaten 80 off 51 deliveries as the hosts beat the visitors by 7 wickets in Canberra on Tuesday. The first game in Sydney was called off due to rain.

After the final T20I in Perth on Friday, the two teams with play two Tests in Brisbane and Adelaide later this month.