Australia defeated Pakistan by seven wickets in Canberra to go 1-0 up in their three-match Twenty20 series. 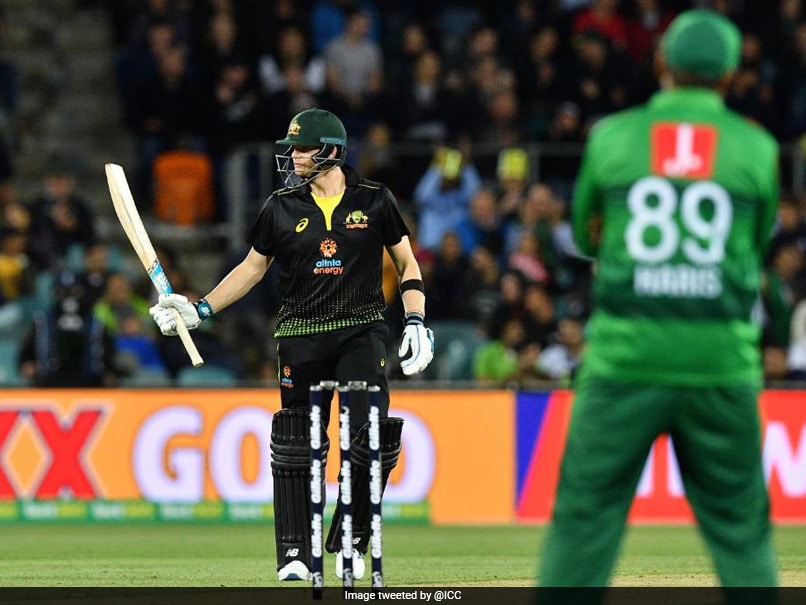 Steve Smith stroked a faultless unbeaten 80 as Australia edged Pakistan by seven wickets in Canberra to go 1-0 up in their three-match Twenty20 series. Top-ranked Pakistan set a competitive 150 for six off their 20 overs, with skipper Babar Azam hitting his second consecutive half-century and Iftikhar Ahmed clubbing a quickfire 62. But their bowling attack was no match for Smith, who brought up his fourth 50 in the short format off 36 balls, with six fours and one big six, as Australia reached 151 for three with nine balls to spare.

It put them 1-0 up after the opening matchin Sydney on Sunday was abandoned due to rain. The final game is in Perth on Friday.

"To get wickets consistently was key. Everyone is playing their roles really well, and we've got guys like Steve, who does what he does best."

Australia is on a hot T20 streak, having not been beaten in their last seven matches.

"Credit goes to Smith," said Azam. "He took the game away with a magnificent innings. We are very disappointed. We didn't bat well in the powerplay."

David Warner had been in fantastic touch after scoring 219 without losing his wicket in four previous innings, and he ominously smashed 16 off Imad Wasim's opening over.

However, the explosive opener was clean bowled by Mohammad Amir for 20, missing a drive, and when Finch fell for 17 to veteran seamer Mohammad Irfan, Pakistan's hopes were up.

But with Smith at the wicket, it was never going to be easy and the experienced campaigner picked the gaps and found the boundary ropes with impeccabley timed shots, while grabbing quick singles.

With Ben McDermott at the other end, he pushed the score to 86 for two off the first 10 overs before his partner fell lbw to Wasim for 21.

It left Smith and Ashton Turner with 45 runs to win off 42 balls, which they managed comfortably.

Earlier, Azam, the world's top T20 batsman, again anchored the Pakistan innings with a 38-ball 50 as teammates fell around him until he found support from Ahmed, who notched a maiden, and entertaining, half-century.

After Pakistan won the toss and opted to bat, opener Fakhar Zaman, desperately in need of runs, was left floundering against Pat Cummins and was out for two, driving to Warner at mid-off.

Haris Sohail came to the crease but only lasted nine balls, gone for six.

It took the wind out of Pakistan's sails, and the runs dried up before Azam and Mohammad Rizwan began to push the scoreboard along -- until Ashton Agar dismissed Rizwan and then Asif Ali in quick succession.

Azam finally found support from Ahmed before the captain was run out for 50 -- his 12th in the short format -- after some fantastic fielding by Warner.

Ahmed ensured it was a competitive score, smashing 22 off the penultimate over from Richardson.

Babar Azam Cricket
Get the latest updates on Fifa Worldcup 2022 and check out  Fifa World Cup Schedule, Stats and Live Cricket Score. Like us on Facebook or follow us on Twitter for more sports updates. You can also download the NDTV Cricket app for Android or iOS.