Former India captain Ajit Wadekar will be honoured with the Col CK Nayudu Lifetime Achievement trophy at the annual Indian Cricket Board awards ceremony to be held in Chennai on December 10. 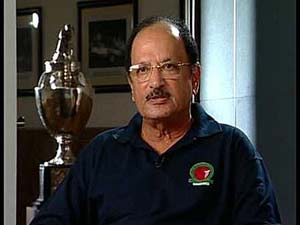 Former India captain Ajit Wadekar will be honoured with the Col CK Nayudu Lifetime Achievement trophy at the annual Indian Cricket Board awards ceremony to be held in Chennai on December 10.

The award will comprise a trophy, citation and cheque for Rs. 15 lakhs, said a BCCI release today.

The 70-year-old Wadekar, who represented India in 37 Tests and scored 2113 runs, expressed his jubilation at receiving the honour. "This is wonderful, really. Whatever little services to cricket I have made have been recognised by the Cricket Board. It's good to get it at such an early age," said Wadekar.

Wadekar made his first-class debut for Mumbai in the late fifties. He had his Test baptism against Garry Sobers' West Indies in the 1966-67 season and established himself in the national side with an innings of 67 in the third Test of the series at Chennai.

Wadekar was appointed the captain of the national team in early 1971 and that became a turning point in the history of Indian cricket. He led India to consecutive series victories against the formidable West Indies and England on their own grounds. This was an unprecedented achievement as never before had India won a Test, leave alone a series, in the Caribbean and England.

Comments
Topics mentioned in this article
Cricket Ajit Laxman Wadekar Nawab of Pataudi Jr
Get the latest updates on IPL 2020, check out the IPL Schedule for 2020 and Indian Premier League (IPL) Cricket live score . Like us on Facebook or follow us on Twitter for more sports updates. You can also download the NDTV Cricket app for Android or iOS.