The 31-year-old has not played a Test match since January 2012 due to a long-standing back problem and last featured in a first-class match in July last year. 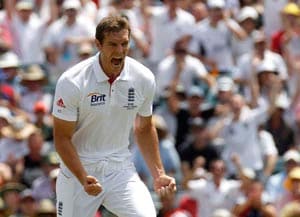 The 31-year-old has not played a Test match since January 2012 due to a long-standing back problem and last featured in a first-class match in July last year.

But he has been handed an opportunity to prove he is fit enough for the rigours of international cricket, having played an important role in England's 2010-11 Ashes success in Australia.

"The players included in this squad reflect the progress they have made with senior England teams and the England Lions over the last 12 months," said England and Wales Cricket Board national selector Geoff Miller.

"All of the players named in the EPS (England Performance Squad) have been involved with one or more of the England squads during the winter, with the exception of Chris Tremlett, who has been going through a rehabilitation process."

There was no place for Nottinghamshire batsman James Taylor, however, despite gritty performances in the two Tests against South Africa last year.

He did not feature in either of the two most recent Test series and was the captain of the England Lions side routed 4-0 by Australia A in their one-day international series earlier this year.

Comments
Topics mentioned in this article
Cricket Stuart Broad England Cricket Team Australia Cricket Team Chris Tremlett Sreesanth James Taylor West Indies Cricket Team
Get the latest updates on India vs South Africa and check out  Schedule, Results and Live Score. Like us on Facebook or follow us on Twitter for more sports updates. You can also download the NDTV Cricket app for Android or iOS.