Chris Gayle Foundation to use Cricket for Change in Jamaica

The Chris Gayle Foundation will host 20 young Jamaicans aged between 16 and 20 from disadvantaged backgrounds for 12 months. 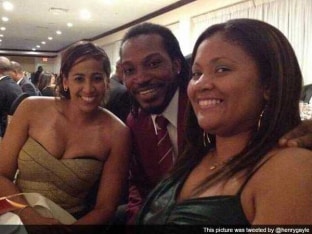 Launched in England in May 2013, the Chris Gayle Foundation has already benefited 18 young men who are now role models in their local communities.

Chris Gayle has tormented bowlers with his bat. Now, the burly West Indian will use his charm to change the lives of young Jamaicans and use cricket for change.

Jamaican branch and will host 20 teenagers from disadvantaged backgrounds for a year. Launched in England in May 2013, the foundation has already benefited 18 young men who are now role models in their local communities.

"Cricket is indeed a powerful sport; it has certainly changed my life," Gayle says. "Through cricket, I was given the tools and support to succeed and I want to share this with the youth through my Academy."

Gayle's academy has a five-year vision. The idea to inspire 3000 children to stay in school and make the most of their education in Jamaica is one of the main agendas. The foundation will deliver high quality social impact programmes using cricket.

If it's Gayle, how can a cricket team be far behind? The foundation's team will play matches against a range of opposition from across Jamaica which will act as a focus for the development of their communication skills, teamwork and collective pride in their achievements. Cricket has lost a lot of ground in the West Indies to athletics and basketball.

Gayle wants young men to inculcate his life's philosophy. Members must spend time putting something back into their communities by volunteering on the Chris Gayle's Big '6' programme in schools and clubs. "This academy is about more than cricket," says Gayle.

Pointing to his UK endeavour, the former West Indian captain adds: "The young men here in the UK come from varying backgrounds and communities and have been able to group together and share their experiences and sharpen their life skills.

Team spirit and communication will be key. "Not all these young men want to pursue professional cricket, but the Academy teaches them important skills that prepare them for the working world," opines Gayle.

"Many of these boys have not had the greatest opportunities, and this Academy brings their talents to the fore and shows them who they can be. Some of these boys came into the Academy not expecting much but have received much more than they anticipated and some have even gone back to school to complete their education to better themselves and excel," says a proud Gayle.