Saurashtrian run-machine displayed an innings of discipline and character to remain unbeaten on 306 as the hosts declared their innings at 564 for nine at tea on Day three of the match at KSCA Stadium. 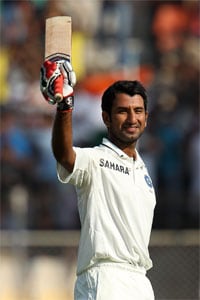 India A skipper Cheteshwar Pujara cracked his second triple hundred in first-class cricket as India A rode on his brilliance to gain control of the third unofficial 'Test' against West Indies A by taking a substantial 296-run first innings lead here on Friday.

Saurashtrian run-machine displayed an innings of discipline and character to remain unbeaten on 306 as the hosts declared their innings at 564 for nine at tea on Day three of the match at KSCA Stadium.

Pujara, who had scored 352 against Karnataka in a first-class match, sweated out for nearly 10 hours in the middle, grinding the visiting team bowlers.

Pujara, who was batting on an overnight score of 139, accelerated the run rate to gain a substantial lead after Abhishek Nayar (11) and Paras Dogra (7) were packed off by medium-pacer Assad Fudadin and left-arm orthodox spinner Nikita Miller, respectively.

The skipper played some delightful shots as he smashed 33 boundaries while adding 177 runs to his overnight score. He reached his triple ton when he cover drove a boundary off left-hand medium fast Delorn Johnson for an exquisite boundary after facing 410 balls.

Pujara, who also has the distinction of scoring three triple-hundreds within a month of domestic first-class cricket, saw wickets tumbling at the other end with contributions of 26, 6 and 19 coming from the bats of Uday Kaul, Dhawal Kulkarni and Zaheer Khan.

Unlike the Indian bowlers, especially Abhishek Nayar and Dhawal Kulkarni, West Indies A bowlers failed to swing the ball. Nevertheless, Ashley Nurse was the leading wicket-taker for the Windies with figures of three for 106, while Nikita Miller and Narsingh Deonaraine took two wickets each. Assad Fudadin and Johnson bagged wicket apiece.

Comments
Topics mentioned in this article
Cricket Cheteshwar Pujara
Get the latest updates on ICC T20 Worldcup 2022 and CWG 2022 check out the Schedule, Live Score and Medals Tally. Like us on Facebook or follow us on Twitter for more sports updates. You can also download the NDTV Cricket app for Android or iOS.