Chamara Silva belted a superb century against England on Tuesday to stake a claim in Sri Lanka's line-up for the upcoming Test series against the tourists. 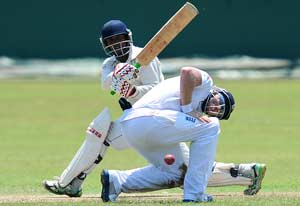 Chamara Silva belted a superb century against England on Tuesday to stake a claim in Sri Lanka's line-up for the upcoming Test series against the tourists.

The right-hander made 163 off 180 balls to lift Sri Lanka Development XI to 376-5 by stumps on the opening day of the three-day tour match at the Sinhalese sports club in Colombo.

The 32-year-old Silva, who played the last of his 11 Tests in April, 2008, smashed 25 boundaries and a six in a timely reminder to the selectors ahead of next week's two-Test series.

Silva and skipper Thilina Kandamby (64) put on 151 for the third wicket after pace bowler Stuart Broad two took early wickets to reduce the hosts to 38-2 in the ninth over.

Broad, who missed the previous practice match due to a sprained ankle, showed he was back to full fitness by removing openers Dilshan Munaweera and Malinda Warnapura in his first spell.

Broad finished with 3-55, but the other England bowlers toiled in oppressive heat and humidity on a wicket that offered them little assistance.

The tourists had won the first practice match against the Cricket Board XI by an innings and 15 runs.

The first Test opens in the southern coastal town of Galle on March 26, followed by the second match at the P. Sara Oval in Colombo from April 3.

Comments
Topics mentioned in this article
England Cricket Team West Indies Cricket Team Australia Cricket Team Cricket Chamara Silva
Get the latest Cricket news, check out the India cricket schedule, Cricket live score . Like us on Facebook or follow us on Twitter for more sports updates. You can also download the NDTV Cricket app for Android or iOS.