Bowlers are majdoors, everybody wants to be like Tendulkar or Sehwag, says Kapil Dev

"Who wants to be a bowler? Everybody wants to be like Tendulkar, Sehwag, Dhoni or Gambhir who are officers," Kapil Dev said. 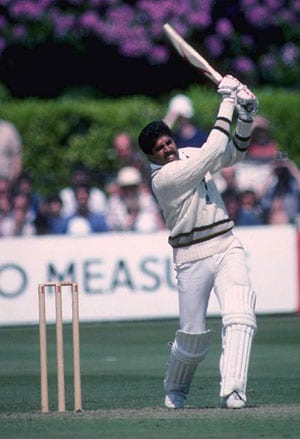 Former Indian cricket captain Kapil Dev on Sunday likened bowlers to workers and batsmen to officers and said most youngsters are eager to bat instead of bowling.

"Who wants to be a bowler? Everybody wants to be like Tendulkar, Sehwag, Dhoni or Gambhir who are officers," the former Indian captain said.

"Bowlers are majdoors (workers). Who wants to be a worker? Everybody wants to be an officer," he added. He was replying to a question raised by the audience on paucity of fast bowlers in the country during an interaction with students, parents and faculty members of a city-based school.

Later, when approached by reporters on the statement, the first Indian bowler who took 400 wickets in Test cricket said, "Even a five-wicket haul (in a match) gets a bowler less credit than a century (by a batsman)."

Asked about role models, Kapil said, "My role models have kept on changing ... As I enter a new phase of life and my circle broadens I start learning new things." His current role model is anti-apartheid activist and former South Africa president Nelson Mandela, while former India batsman Gundappa Rangnath Viswanath was his hero in cricket.

"I used to worship him (Viswanath)," he added. Asked which batsmen he hated the most during his cricketing career, Kapil said "I used to hate any batsman who would not get out in my deliveries."

On whether he had plans to promote and develop cricket in Assam, the former all-rounder said, "For me the entire country is my region. For me it is not important whether I am doing something in Chandigarh or Assam. We all represent our country."

He advised young players and aspirants not to emulate others but become role models themselves. "I never wanted to take anybody else's autograph. I always wanted to give my autographs to others."

Kapil, who was inducted to the ICC Cricket Hall of Fame said children should be allowed to find their own passions. However, he now felt that he should have studied more than he did.