Ben Dunk, 27, was one of the top players in the Twenty20 Big Bash League last season. 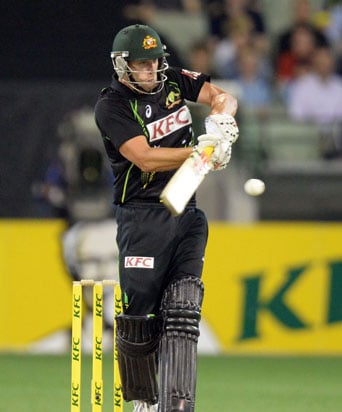 Tasmania wicketkeeper-batsman Ben Dunk was named Monday in Australia's Twenty20 squad to face South Africa two days after hitting an unbeaten 229 to set a domestic one-day record for his Tasmanian state side.

Dunk, 27, was one of the top players in the Twenty20 Big Bash League last season. No. 1 wicketkeeper Brad Haddin will be among those still in the United Arab Emirates on Test duty against Pakistan when the three-match T20 series against South Africa starts Nov. 5.

Allrounder Shane Watson will make his international return from injury after making a successful comeback in club cricket on Sunday. Watson was forced out of Australia's recent tours to Zimbabwe and the U.A.E. with ankle and calf problems that resulted from him stepping on a ball at training.

Veteran left-arm paceman Doug Bollinger has been given another chance at international cricket at the age of 33 and will lead the bowling attack with Kane Richardson.

Cameron White will have a chance to push for World Cup selection and allrounder James Faulkner will play if he is not required for test duty against Pakistan in the U.A.E. (Pakistan Recall Taufeeq Umar for Australia Tests)

Comments
Topics mentioned in this article
Ben Robert Dunk Cameron White Doug Bollinger Australia Cricket Team South Africa Cricket Team Cricket
Get the latest updates on ICC T20 Worldcup 2022, check out the Schedule and Live Score. Like us on Facebook or follow us on Twitter for more sports updates. You can also download the NDTV Cricket app for Android or iOS.