N Srinivasan says three new stadiums have been constructed and praises Gujarat for "leading" the nation on various fronts. 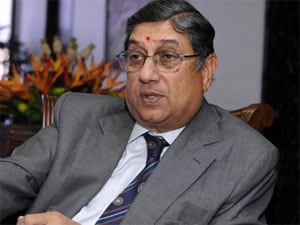 Board of Control for Cricket in India (BCCI) president N Srinivasan on Sunday, said that his organisation is taking necessary measures to improve the cricket infrastructure in the country.

"BCCI is taking all measures to improve the cricketing infrastructure. Because of BCCI's policy, three new stadiums are ready to host their maiden ODI match in the upcoming ODI series against England," Srinivasan said at the inaugural function of SCA stadium at Khandheri here.

"The three new stadiums have been constructed in Ranchi, Rajkot and Dharamshala," he added.

Srinivasan praised Gujarat for "leading" the nation on various fronts.

"Gujarat leads India in industrial development and is larger than any other states in terms of cricketing activities," he said.

"Gujarat is the only state in the country which has three different cricket associations existing at Vadodara (BCA), Ahmedabad (GCA) and Rajkot (SCA)," he added.

The BCCI chief said that the SCA stadium has world-class facilities.

SCA honorary secretary Niranjan Shah, who is also the vice-president of BCCI (West Zone), said experts had studied various stadiums in the country and also abroad before this stadium was designed.

The SCA stadium has been constructed on 30 acres of land at a cost of Rs 75 crore, Shah said adding that it would help young cricketers to hone their skills.

The stadium will host the first ODI against England on January 11.

Comments
Topics mentioned in this article
Cricket Sourav Ganguly BCCI NR Shah
Get the latest updates on ICC T20 Worldcup 2022 and CWG 2022 check out the Schedule, Live Score and Medals Tally. Like us on Facebook or follow us on Twitter for more sports updates. You can also download the NDTV Cricket app for Android or iOS.