Sahara Group said the "arbitrary" reduction in the number of IPL matches by the BCCI from the number stipulated in the franchise agreement was at the centre of the whole dispute. 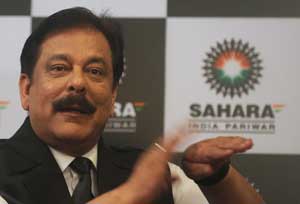 Sahara Group on Saturday sought to defend its decision to not furnish the bank guarantee to the BCCI which led to the termination of Pune Warriors from the IPL, saying that it was forced to do that as the Board "has always acted in betrayal of trust and not fulfilled its part of obligations".

Sahara Group said the "arbitrary" reduction in the number of IPL matches by the BCCI from the number stipulated in the franchise agreement was at the centre of the whole dispute.

"BCCI had made pre-bid representations that 94 matches will be held in every season and then arbitrarily reduced the number of matches from 94 to 74 & then 76. Sahara had placed its bid for IPL franchise based on the representations of BCCI which were false," the Sahara group said in a release. (BCCI's full statement)

With a defiant Sahara group refusing to furnish the requisite bank guarantee, the BCCI decided to terminate Pune Warriors from the IPL after a meeting of its all-powerful working committee in Chennai.

Sahara said the BCCI's act of terminating Pune Warriors from the IPL for non submission of bank guarantee was a desperate measure to cover up its (Board's) non compliance of promises and obligations.

"The issue raised by BCCI in creating grounds for termination as non submission of Bank Guarantee seems like a desperate measure to cover for their non compliance of promises and obligations."

"Sahara has paid over Rs 1000 crore as Sponsorship fee for the Indian Team to BCCI since 2001 without any default ever. This is apart from the Franchise Fee for Pune Warriors which Sahara kept on paying since Year 1 despite being given false assurances of justice," Sahara Group said.

Sahara also accused the BCCI of thwarting the arbitration process which was proposed to settle the issue amicably.

"Despite assurances given in a meeting between Mr Subrata Roy Sahara and Mr N Srinivasan, president - BCCI in February 2012, subsequent to which a joint media statement was issued whereby both parties agreed to start the arbitration proceedings to address Sahara's claim for a reduction in franchise fee for 74 matches," the company said.

"However, in contravention of the understanding reached between the parties, no steps were taken by BCCI to address our long standing demand of the reduction of the Franchise Fee. In fact, far from starting the arbitration, BCCI has thwarted the process."

Sahara said this was not the only time that BCCI has treated Pune Warriors in an unfair manner.

"Right from day one, when the rule of player retention was altered prior to IPL Season 4 (which was the 1st year of PWI in the League) all our requests for seeking a level playing field by having an Open Auction for the players were turned down. The original Franchise document of 2008 had a provision of Open Auction every three years. Hence, when constituting a new team we were deprived of the opportunity to bid for players of the likes of Sachin, Dhoni, Sehwag, Watson, Malinga etc.

"As a promoter of sports, the insensitiveness towards our genuine concerns was very disheartening and this step though known, is unfortunate," it said.

Sahara said invoking the bank guarantee was also an act of betrayal as the BCCI had assured that the issue will be resolved amicably.

"When Mr Subrata Roy Sahara himself wrote to BCCI President expressing his concerns before the start of the last Season, the BCCI President chose not to respond himself, instead deputing his agency to send a denial for consideration," Sahara said.

"However, again in stark contravention of the understanding and betrayal of trust, our Bank Guarantee was invoked. BCCI waited before conducting this act of betrayal because any such move midway through the tournament would have jeopardized their broadcaster commitments."

Comments
Topics mentioned in this article
Cricket BCCI India Cricket Team Liverpool Pune Warriors India
Get the latest Cricket news, check out the India cricket schedule, Cricket live score . Like us on Facebook or follow us on Twitter for more sports updates. You can also download the NDTV Cricket app for Android or iOS.