Bangladesh vs Zimbabwe: Bangladesh Thrash Zimbabwe By Innings And 106 Runs In One-Off Test

Nayeem Hasan claimed five wickets as Bangladesh beat Zimbabwe by an innings and 106 runs in the one-off Test in Dhaka on Tuesday. 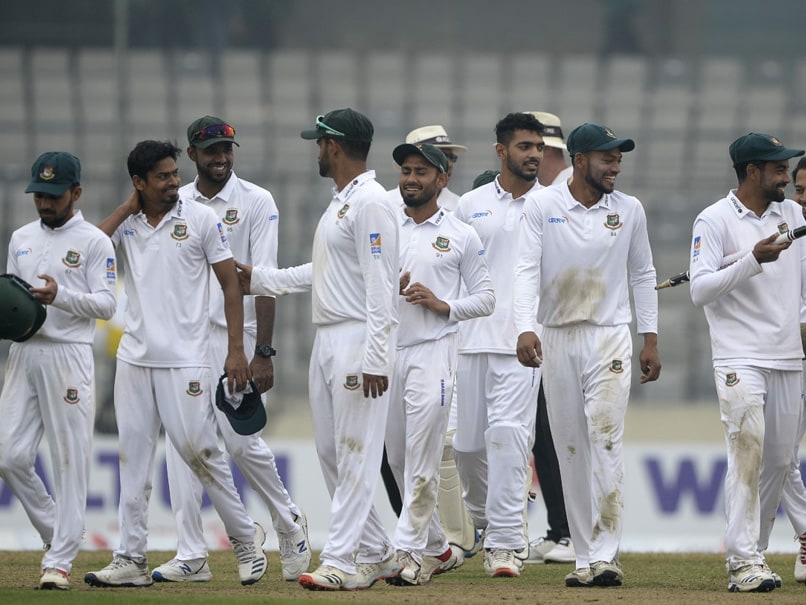 Bangladesh bowled out Zimbabwe for 189 in their second innings.© AFP

Spinner Nayeem Hasan claimed a match haul of nine wickets as Bangladesh thrashed Zimbabwe by an innings and 106 runs inside four days in the one-off Test on Tuesday. The big victory in Dhaka ended a six-match losing streak for the hosts and handed centurion Mominul Haque his first win as Test captain. Zimbabwe, who trailed by 295 after the first innings, were all out for 189 in the second session with Nayeem returning figures of 5-82. Nayeem was supported by fellow spinner Taijul Hasan who took four wickets as Zimbabwe lost batsmen at regular intervals after resuming on nine for two, although skipper Craig Ervine (43) and Timycen Maruma (41) offered some resistance.

Mushfiqur Rahim set up the win with his unbeaten 203 as the hosts declared their innings on 560 for six on Monday, in response to Zimbabwe's 265.

Mominul struck his first century as Test captain with a 132 and put on 222 runs with Mushfiqur to set the tone for his team's dominance.

"Everyone did well, and I am happy for the team. We tried to put up a big score and we were able to get that," said Mominul, who became captain in November.

"I don't think it is a difficult start to my captaincy career," he added. "Yes, we have to win more matches but we will do better."

Taijul took the final wicket of Charlton Tshuma with his left-arm orthodox as the home side celebrated only their second innings victory.

Taijul began the victory push for Bangladesh on the fourth day when he sent back Kevin Kasuza for 10 in the sixth over of the morning session.

Nayeem, who claimed two wickets in the first over of Zimbabwe's second innings on Monday, took the key scalp of senior batsman Brendan Taylor who top-edged a catch to Taijul at long leg for 17.

Ervine and Raza defied the bowling to put on 60 runs for the fifth wicket, but then Ervine's run-out dented Zimbabwe's hopes.

Raza set off for a single off Taijul, but Mominul broke the stumps at the striker's end with a direct hit from cover point to end Ervine's promising innings.

Mushfiqur took a brilliant reflex catch at mid-wicket off Taijul to end Raza's innings before Tamim took another spectacular catch at mid-on to remove Regis Chakabva for 18.

Nayeem trapped Ainsley Ndlovu leg-before for four before completing his five-wicket haul with the wicket of Maruma. He ended with match figures of nine for 152.

Tshuma unsuccessfully reviewed a leg-before decision against him off Taijul to become the last man dismissed as Bangladesh ended their six-match losing streak in Tests.

Zimbabwe's Ervine, who scored 107 in his team's first innings, said they did not capitalise after winning the toss and batting first.

"It was nice to get some runs in the game but it was one of those disappointing games that we have to put behind us," said Ervine.

"We probably just did not kick on from the start and we definitely needed more than 260 in the first innings."

Mushfiqur Rahim Nayeem Hasan Cricket
Get the latest updates on ICC T20 Worldcup 2022 and CWG 2022 check out the Schedule, Live Score and Medals Tally. Like us on Facebook or follow us on Twitter for more sports updates. You can also download the NDTV Cricket app for Android or iOS.