The third ODI match between Pakistan and Bangladesh saw as many as 11 spinner being used by both teams. 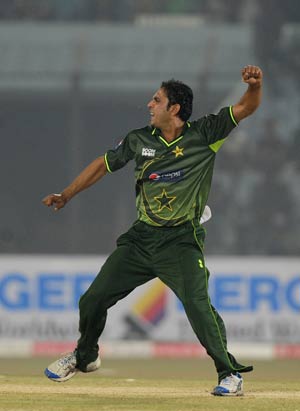 The third ODI match between Pakistan and Bangladesh saw as many as 11 spinner being used by both teams.

Bangladesh were the first to script a massive collapse courtesy a generous use of spin on the track at Zahur Ahmed Choudhary stadium.

Shafiul Islam's pace may have struck in the first over to remove Mohammad Hafeez (0) but from here on, it was all spin. Shakib al Hasan dismissed the other opener in Asad Shafiq (7) and Abdur Razzaq took three wickets with his left-arm spin. There was some respite for the visitors when Younis Khan (26), Misbah-ul-Haq (47) and Umar Akmal (57) were at the crease but the next six batsmen managed to add just 24 runs to the eventual score of 177.

Mahmudullah's off-break and Elias Sunny, playing his second ODI, shared five wickets between them. Alok Kapali and Nasir Hossain bowled four overs each without a wicket.

Pakistan replied with Hafeez's spin in the beginning and opener Tamim Iqbal (0) left in the first over itself. Skipper Misbah brought in Shahid Afridi, Saeed Ajmal, Abdur Rehman and Shoaib Malik along with the pace of Umar Gul and Soahil Tanvir to make maximum use of a pitch that appeared to greatly assist spin.

Bangladesh eventually lost the match by 58 runs, folding on 119. Three wickets were claimed by Malik and Hafeez while Rehman and Ajmal took two each.