The Bangladesh Cricket Board has asked Rubel Hossain to explain why he failed to follow the guidelines drawn up by the team physio to hasten his recovery from a calf injury. 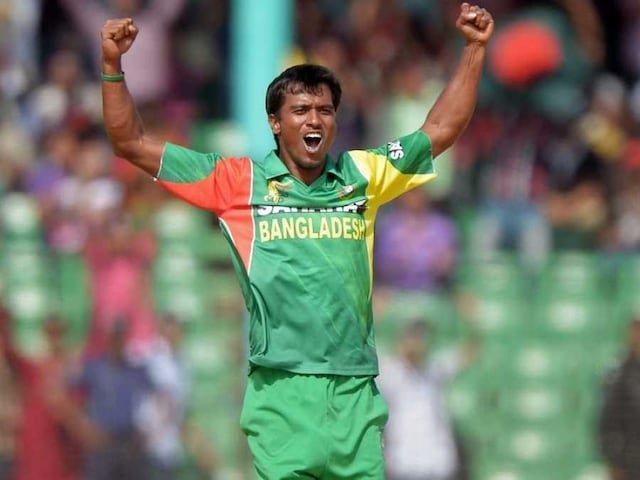 Rubel Hossain sustained the injury during the Bangladesh A team's tour of India in September.© AFP
Dhaka:

The Bangladesh Cricket Board has dropped pacer Rubel Hossain from its list of contracted players after accusing him of failing to follow instructions to help him recover from injury. (Shahadat Hossain Indicted for Torturing Domestic Help)

The BCB has asked the 26-year-old to explain why he failed to follow the guidelines drawn up by the team physio to hasten his recovery from a calf injury. (Bangladesh Cricket Board Lifts Ban on Umpire Nadir Shah)

"We've told Rubel we will reconsider reinstating him in the national contract only after he gives a satisfactory answer to our notice," board spokesman Jalal Yunus told AFP on Tuesday.

Rubel, a key member of Bangladesh's attack at last year's World Cup, has been sidelined since November after he aggravated a calf injury.

After sustaining the injury during the Bangladesh A team's tour of India in September, he played six matches in the Bangladesh Premier League Twenty20 tournament.

The cricket board late Monday announced 14 players would be given contracts for this year, which makes them part of the national squad and entitles them to a regular salary.

The contract list includes three newcomers, Soumya Sarkar, Sabbir Rahman and Mustafizur Rahman, who were rewarded for good performances in 2015.

The board also announced a 25 percent pay rise for the contracted players.

Comments
Topics mentioned in this article
Bangladesh Cricket Team Rubel Hossain Cricket
Get the latest Cricket news, check out the India cricket schedule, Cricket live score . Like us on Facebook or follow us on Twitter for more sports updates. You can also download the NDTV Cricket app for Android or iOS.