Suhrawadi Shuvo was struck on the second cervical vertebrae. He collapsed on the pitch and was immediately rushed to Dhaka's Apollo Hospital, where he was being treated at the clinic's Intensive Care Unit 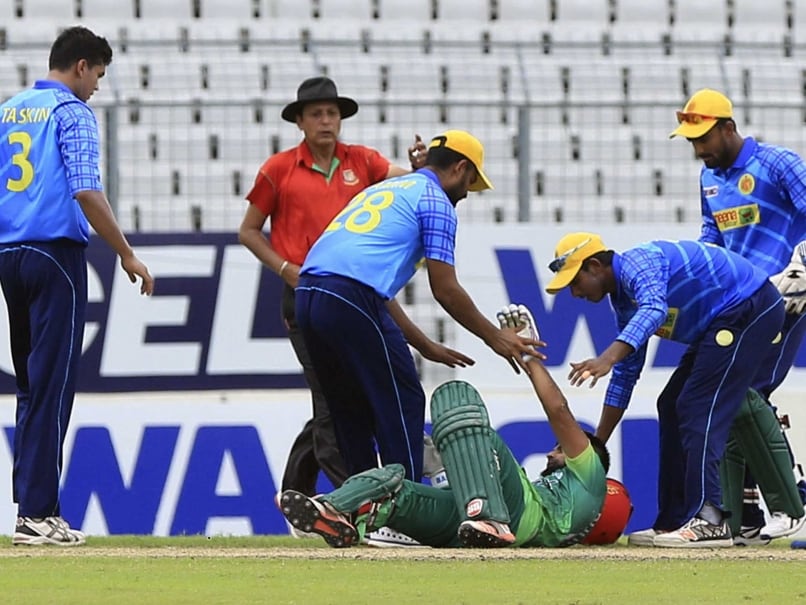 Bangladesh's international cricketer Suhrawadi Shuvo on the ground after being hit with a ball bowled by pacer Taskin Ahmed (left) in Dhaka on Saturday. © AFP

Bangladesh's international cricketer Suhrawadi Shuvo was hospitalised Saturday after he was hit on the neck by abouncer during a domestic league match.

Panic gripped local cricketers after the 27-year-old fell to the ground and was stretchered off as he tried to duck a rising delivery by the country's international paceman Taskin Ahmed.

He was kept under observation for 24 hours, though doctors said he is now "out of danger" and his condition is "stable".

"Our primary investigation show no damage in his brain or no internal hemorrhage," Bangladesh Cricket Board physician Monirul Amin told AFP.

"Still he will be under observation for a full day as a precaution."

The incident happened during a Dhaka Premier League match between Victoria Sporting Club and Abahani Limited at the Sher-e-Bangla National Stadium in Mirpur.

Shuvo was batting on 21 for the local side Victoria in the Dhaka Premier League when the pacer from the tournament favourite Abahani sent the delivery on the 25th over.

Doctors said Shuvo was struck on the second cervical vertebrae. He collapsed on the pitch and was immediately rushed to Dhaka's Apollo Hospital, where he was being treated at the clinic's Intensive Care Unit.

A left-arm spinner, Shuvo also represented Bangladesh in 17 one-day internationals, including in the World Cup 2011. He was part of the squad that whitewashed New Zealand in a 2010 ODI series at home.

He claimed 14 wickets in ODIs, including a match-winning 3-14 against New Zealand in that historic 4-0 series win.

Comments
Topics mentioned in this article
Suhrawadi Shuvo Cricket Taskin Ahmed
Get the latest updates on India vs Australia and check out  Schedule, Results and Live Score. Like us on Facebook or follow us on Twitter for more sports updates. You can also download the NDTV Cricket app for Android or iOS.