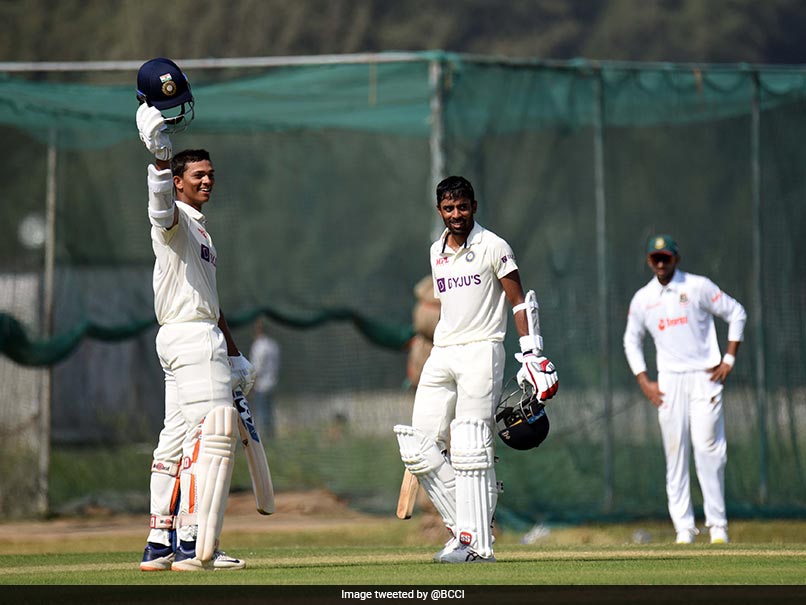 Bangladesh A batters gave a far better account of themselves on an eased track as they reached 172 for one in their second innings after India A declared at an imposing 465 for five on the third day of the first unofficial 'Test', in Cox Bazar on Thursday. With Abhimanyu Easwaran and Yashasvi Jaiswal's twin hundreds headlining the second day's play, India batted an hour on the third day with third choice red-ball keeper Upendra Yadav (71 not out, 122 balls) completing his half-century before the declaration came into effect.

Having conceded a mammoth first innings lead of 353 runs, Bangladesh A players did show a lot of commitment in the second innings as Zakir Hasan (81 batting) and Test star Najmul Hossain Shanto (56 batting, 124 balls) added 101 runs for the unbroken second wicket stand.

This was after Zakir and Mamhmudul Hasan Joy (21, 88 balls) added 71 for the opening stand and constructed a platform for consolidation.

For India, the only successful bowler during their 63 overs of vigil on the day was left-arm orthodox Saurabh Kumar (1/45 in 18 overs).

Saurabh got his fifth wicket of the match by having Joy caught by Jayant Yadav after nearly two wicket-less hours.

Both Saurabh and off-spinner Jayant (0/55 in 18 overs) lacked bite in the second essay and a lot has got to do with the pitch easing out considerably.

The Indian bowlers had made the most out of the moisture available on opening morning and since then, the track at the Sheikh Kamal International Stadium has been a batting paradise.

Bangladesh Cricket Team Abhimanyu Easwaran Yashasvi Jaiswal Cricket
Get the latest updates on IPL Auction 2023 and check out  IPL 2023 and Live Cricket Score. Like us on Facebook or follow us on Twitter for more sports updates. You can also download the NDTV Cricket app for Android or iOS.