Copeland and Lyon to debut against Sri Lanka

Seamer Trent Copeland and offspinner Nathan Lyon will make their Test debuts for Australia in the first Test against Sri Lanka in Galle. Usman Khawaja edged Shaun Marsh out of the side, and will get his chance to bat at No. 6 in a line-up that was named one day early. 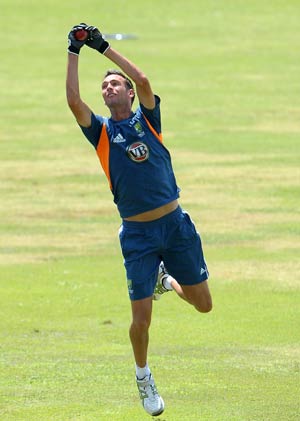 Seamer Trent Copeland and offspinner Nathan Lyon will make their Test debuts for Australia in the first Test against Sri Lanka in Galle. Usman Khawaja edged Shaun Marsh out of the side, and will get his chance to bat at No. 6 in a line-up that was named one day early.

Lyon, who won the tussle for the lone spinner's spot with Michael Beer, is trained as a groundsman, and was seen in conversation with Greg Chappell, the selector on duty, before making a close inspection of the pitch. Lyon and Beer both extracted useful turn from the practice wickets either side of the match strip, but they appeared no more dangerous than Copeland, who beat the bat frequently.

Sri Lanka captain Tillakaratne Dilshan said that while the surface will take spin, its dry nature would aid reverse-swing. The breeze from the Indian Ocean is also known to help the fast bowlers. Copeland is likely be used for long, tight spells while Mitchell Johnson and Ryan Harris tear in at the other end.

Michael Clarke acknowledged Copeland's strengths, which have also been cited by numerous locals, as likely to be exceptionally useful in Sri Lankan wickets. Also central to his thinking is the fact that Johnson and Harris will be more capable of slipping in quick, aggressive spells with the support of Copeland.

"The greatest advantage Copes has is his statistics in first-class cricket don't tell a lie," Clarke said. "There's a reason he's had success there and I'm certain it'll be the same reason he [will] have success for Australia. He's got great control. Very rarely do you see too many blokes hitting him with the middle of the bat consistently and I think that's because he's got good height and he just wobbles the ball enough. I'm a big wrap for him - I love his control, I love the way he bowled in the first game.

"He bowls a lot of overs for not many runs, so that's a great strength. In these conditions if the wickets are flat, it gives you the option to set fields he can bowl to. Because his pace is a little bit slower, he generally has more control so he can bowl more to a field than someone who is bowling at 150km/h."

There have been 12 outright results from the 17 Test matches played at the Galle International Stadium since 1998, nine of them enjoyed by the hosts. Only when rain intervenes, as it did when the Australians first played here in 1999, do the chances of a firm outcome dissipate.

Clarke, in his first Test as Australia's fully-fledged Test captain, could not help but notice the lack of grass on a good length at either end of the pitch. Whatever excess foliage remained in the middle had been shaved off by the ground staff by the time the Australians returned for their final training session.

"It looked dry at the ends yesterday; it looked like they had cut the grass off the ends but left the grass in the middle of the wicket," Clarke said. "But I got a phone call last night saying when we left the ground they shaved that as well. I don't know what happened after training but the wicket seemed to have changed.

"It's pretty hard as well; it will definitely spin but I don't know if it will spin [from] day one or day two. There might be a bit more pace and bounce than what we had in the practice game. It will spin, but it is just a matter of how early or how much."

Australia have misread overseas pitches before, no more disastrously than the dry surface for the fifth Ashes Test at the Oval in 2009, when no specialist spinner was chosen. However Clarke said it was important the tourists did not get spooked by the perceived threat of the conditions, and chose the combination most likely to succeed in the team's first Test since the horrors of the previous home summer.

"I just think with the first match of the series we've got to get the right combination," Clarke said. "If we think the quicks are going to be our best solution to take 20 wickets then we have to go with three fast bowlers no matter what Sri Lanka do, or no matter if we think it's going to spin. Looking at that wicket yesterday looks quite hard and dry and that will bring reverse-swing into play ... if it's hard there might be a bit more carry into play as well."

Comments
Topics mentioned in this article Australia Cricket Team Cricket Trent Copeland Nathan Lyon
Get the latest Indian Premier League 2020 news, check out the IPL 2020 schedule, Cricket live score . Like us on Facebook or follow us on Twitter for more IPL 2020 updates. You can also download the NDTV Cricket app for Android or iOS.
Related Articles