Clint McKay dismissed Kevin Pietersen (5), Jonathan Trott and Joe Root in successive balls at Cardiff to become the fifth Australian and 34th bowlers in ODI history to claim a hat-trick. 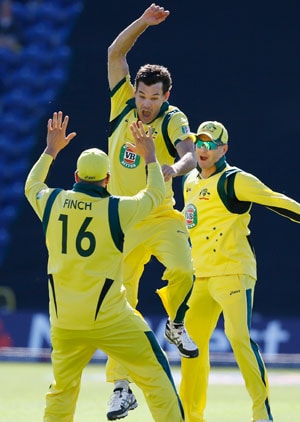 McKay trapped Kevin Pietersen for 5, then enticed edges to the slip cordon from Jonathan Trott and Joe Root to reduce England to 8-3 at Sophia Gardens on Saturday. As it turned out later, his hat-trick was not enough for Australia as England chased down the 228-run target with three wickets in hand, thanks to an unbeaten 65 by Jos Buttler.

He became only the fifth Australian to take three wickets in successive balls in ODIs, and the 34th player in the history of the format.

McKay's rise as an ODI bowler is also highlighted by another stat - he is now the sixth successful bowler after playing 49 games in ODI cricket.

Comments
Topics mentioned in this article
Cricket Jonathan Trott Clint McKay Joe Root Michael Clarke Brett Lee Kevin Pietersen Australia Cricket Team England Cricket Team
Get the latest updates on IPL 2020, check out the IPL Schedule for 2020 and Indian Premier League (IPL) Cricket live score . Like us on Facebook or follow us on Twitter for more sports updates. You can also download the NDTV Cricket app for Android or iOS.