Aaron Finch and David Warner comfortably chased down the target as Australia beat Pakistan by 10 wickets with 49 balls to spare. 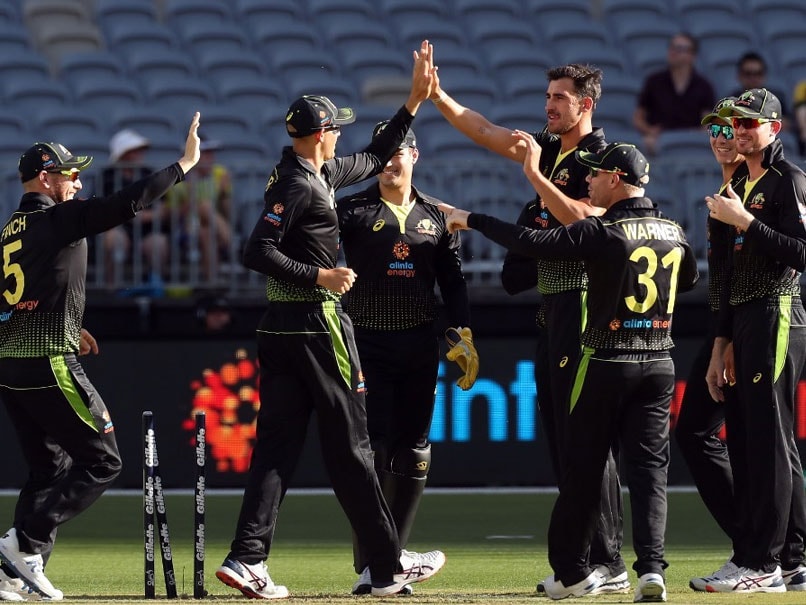 Australia beat Pakistan by 10 wickets after restricting them to 106/8 in their 20 overs.© AFP

Ruthless opening pair Aaron Finch and David Warner ran riot as Australia routed Pakistan by 10 wickets in Perth to wrap up their T20 International series 2-0 Friday in emphatic fashion. After restricting the visitors to 106 for eight, Finch (52) and Warner (48) whacked five sixes and eight fours between them as they raced to the finish line without loss. The home team won in Canberra by seven wickets, thanks to a brilliant 80 not out by Steve Smith, and were on track to also triumph in Sydney only for rain to save the visitors.

Their victory in Perth has them on an impressive eight-game winning streak in the short format as they build towards the T20 World Cup on home soil next year.

"Really proud of the boys with the way we applied ourselves in the last couple of weeks. Each time we turn up at training, we are improving ourselves and that is very important," said captain Finch.

"We are growing as a team and hopefully some big things to come."

In contrast, Pakistan are struggling and have now lost five of their last six.

Despite the poor run, which included an embarrassing 3-0 home series defeat to an under-strength Sri Lanka that cost Sarfaraz Ahmed the captaincy, they remain number one in the rankings.

But their cricket chiefs will be worried about the two Tests against Australia to come, starting this month in Brisbane.

"Very disappointed, but we lost to a good team. We have learnt a lot from this series and we'll take the positives and come back hard in the next series," said skipper Babar Azam.

"As captain, I learnt a lot personally too, but there's a long way to go."

After being sent in to bat at the Perth Arena, Iftikhar Ahmed's 45 was the only resistance by Pakistan in a repeat performance of poor batting against quality bowling, led by Kane Richardson who took three wickets.

On a fast, bouncy pitch, Finch and Warner showed no pity in reply, exposing Pakistan's young and fragile attack.

The explosive Warner hit Mohammad Amir for six in the first over and there was no looking back in a display of power-hitting from the two men.

Pakistan made four changes with Imam ul-Haq and Mohammad Hasnain coming in and debuts handed to batsman Khushdil Shah and bowler Muhammad Musa.

Only Azam and Ahmed have shown signs of life in the batting department this series and, again, no one else stood up.

Azam had hit consecutive 50s in the previous games, but he fell early, out lbw to Mitchell Starc for six.

The Australian fast bowler then smashed the stumps of Mohammad Rizwan next ball with a searing inswinger, leaving Pakistan at 15 for two.

He hit two boundaries in his 14 before mis-hitting a pull shot off Sean Abbott, playing his first international since 2014, for Ben McDermott to take an easy catch.

When Ahmed -- who scored a quickfire 62 in Canberra -- finally went looking for a boundary off Richardson, it was left to the tailenders to at least ensure their team made it to three figures.