England in 2013-14 were battered by the hostility of paceman Mitchell Johnson, backed up by Ryan Harris and Peter Siddle and the resilience of Australia's lower batting order. 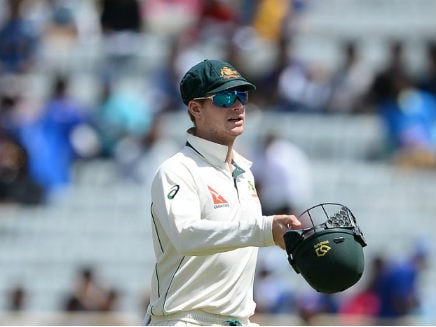 Skipper Steve Smith says Australia plan to re-open old English Ashes scars starting with a morale-shattering blow in the series opener at the Gabba this month. Smith has indelible memories of the shattering effect of the opening Brisbane Test from the last 2013-14 Ashes battle in Australia on the remainder of that series. England were battered by the hostility of paceman Mitchell Johnson, backed up by Ryan Harris and Peter Siddle and the resilience of Australia's lower batting order.

Smith said he wants those in the England's squad who played in that series -- captain Joe Root, Alastair Cook, Jonny Bairstow, James Anderson, Stuart Broad and Steven Finn -- to relive the nightmare and for it to permeate through to the rest of the team.

"First Test match is going to be really important, we need to set the tone again and hopefully get them on a similar path to what we did in 2013," he told the ESPNcricinfo website Thursday ahead of the first Test on November 23 in Brisbane.

He said he expected England coach Trevor Bayliss to ensure his team had an attacking frame of mind, and admitted Australia's middle order needed to be more productive to be successful.

"We've had a lot of collapses in the last couple of years," he said. "I think in our last 15 games we've had 14 collapses or something like that.

"We can't afford to do that this summer and (batting positions) six and seven are a place where we'll need some rebuilding if those sorts of things happen and it's going to be a valuable spot if guys there are getting runs for us.

"It'll make a big difference, so let's hope that is the case."

Smith, who has not scored an international century since his prolific tour of India in March, said he was refreshed and hopeful of returning to his best form for the five-Test clash with England.

He is the top-ranked Test batsman ahead of Root and heads into the Ashes with a batting average of 59.66 from 56 Tests with 20 centuries.

Comments
Topics mentioned in this article
Australia Cricket Team England Cricket Team Steven Smith Joe Root Cricket
Get the latest updates on ICC T20 Worldcup 2022 and CWG 2022 check out the Schedule, Live Score and Medals Tally. Like us on Facebook or follow us on Twitter for more sports updates. You can also download the NDTV Cricket app for Android or iOS.