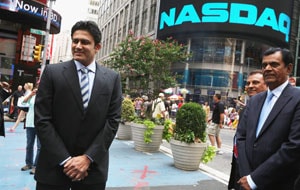 Kumble was accompanied by members of the Federation of Indian Associations (FIA), which is one of the largest umbrella organisations of the Indian community in New York, New Jersey and Connecticut.

Kumble is the chief guest at the annual India Day Parade, organised by the FIA.

Actor Saif Ali Khan is grand marshall of the parade, which will run through 10 blocks in Manhattan on Sunday.

Kumble said it is an honour for him to represent India at the closing bell ceremony at Nasdaq.

"There is a lot of representation in Nasdaq from India and thanks to the Indian community that a cricketer is here to ring the closing bell," Kumble said.

Every year, thousands of New Yorkers throng Manhattan's Madinson avenue to watch the parade, which showcases the culture and heritage of India as well as the contribution of the Indian Americans in the country through colourful floats and dance performances.

Last year actress Rani Mukherjee was the grand marshall of the parade.

Comments
Topics mentioned in this article
Cricket Anil Kumble
Get the latest updates on ICC T20 Worldcup 2022 and CWG 2022 check out the Schedule, Live Score and Medals Tally. Like us on Facebook or follow us on Twitter for more sports updates. You can also download the NDTV Cricket app for Android or iOS.