England captain Andrew Strauss entered the debate over the controversial omission of Kevin Pietersen from this week's third Test on Tuesday, saying he regretted "dirty laundry" being aired in public. 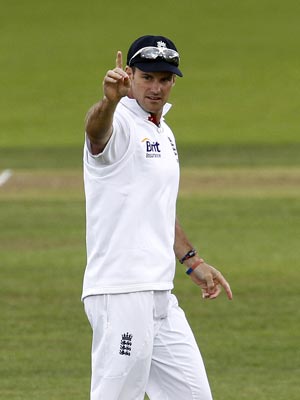 England captain Andrew Strauss entered the debate over the controversial omission of Kevin Pietersen from this week's third Test on Tuesday, saying he regretted "dirty laundry" being aired in public.

Last weekend, Pietersen was dramatically dropped from England's squad, despite scoring a superb 149 in the second Test at Headingley, after failing to reveal the contents of text messages allegedly sent to South African players during that match.

Some of those texts are said to include derogatory comments about Strauss and England coach Andy Flower.

Pietersen's inability to either say whether the messages were true, or indeed apologise for them if they were, led England to omit him from the third Test which starts at Lord's on Thursday.

It is a game England, 1-0 down in the three-match series, must win if they are to prevent South Africa replacing them as the world's number one Test side.

The match also marks Strauss's 100th Test and his 50th as captain, with the fixture taking place on his Middlesex home ground.

Tensions between Pietersen and the England hierarchy have been escalating all summer, with the South Africa-born batsman retiring fron limited overs internationals after England refused his wish to opt out of 50-over matches while still playing Twenty20s.

Then came his extraordinary press conference after the Headingley Test, where he speculated the match at Lord's might be his "last Test".

And last week, on the eve of the squad announcement for Lord's, he took to YouTube to insist he was now available to play for England in all formats.

But it appears the text issue was the final straw for the England and Wales Cricket Board (ECB) although Strauss, in an interview with Sky Sports on Tuesday, insisted he'd always had good relations with his Pietersen, his predecessor as England captain.

"I've always got on with Kevin," he said. "I've tried to be honest with him; he's been honest with me.

"That's why this has all been a bit of a surprise to me," Strauss said.

"I think the discontent that Kevin had with the board over his contract situation was one that the players didn't get involved in -- and I didn't really get involved in, if I'm honest.

"But over the last week I have had to get involved, because there have been issues a little bit more central to his relationship with the other players and our ability to perform out in the middle."

Strauss's management partnership with Flower has been behind much of England's success in recent years and the opening batsman added: "Firstly, I'm a big believer in not airing dirty laundry in public.

"Any time anyone has fallen foul of that they have been disciplined -- and rightly so.

"It's about mutual respect and trust, and that is a core issue that is central to resolving this."

The account - KP Genius - was set up by a friend of Broad, Richard Bailey, and had been thought to have contributed to the strained relations Pietersen felt within the England dressing room amid suggestions some of his team-mates were involved.

But all-rounder Broad, in a statement issued by the ECB on Tuesday, insisted: "I would like to confirm that I had no involvement in this whatsoever.

"As has been widely reported Mr Bailey is a friend of mine, but we had no conversations regarding this issue at all and I am pleased that he has now decided to close the parody account down."

"Just because you lose one player, it doesn't necessarily make you a weaker team. In fact, since Kevin retired from limited-overs cricket, we are unbeaten in all matches in the shorter formats."

Comments
Topics mentioned in this article
Cricket Andrew Strauss England Cricket Team Michael Clarke Kevin Pietersen Eoin Morgan
Get the latest updates on ICC T20 Worldcup 2022 and CWG 2022 check out the Schedule, Live Score and Medals Tally. Like us on Facebook or follow us on Twitter for more sports updates. You can also download the NDTV Cricket app for Android or iOS.