This Test series is only five days old, but already Michael Clarke's Australians can sense victory. 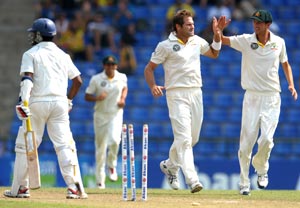 This Test series is only five days old, but already Michael Clarke's Australians can sense victory. Their win inside four days in Galle was impressive, but even more encouraging for the country's fans was the way Australia started the second Test in Pallekele, as an attack led by Ryan Harris bundled Sri Lanka out for 174 on a good batting pitch, and then the openers took the score to 60 for 0 before bad light stopped play.

Shane Watson was on 36 and Phillip Hughes had made 23, and both men had played some wonderful shots, showing just how friendly the surface was. Australia know about one-sided days like these. They've been on the wrong side of a few over the past couple of years. This time it was Sri Lanka's turn to wonder what more could have gone wrong.

Their problems started before a ball was even bowled, as their best spinner from the previous Test, Rangana Herath, was ruled out due to a finger injury. If that wasn't bad enough, the man they wanted to replace him, the mystery spinner Ajantha Mendis, woke up with a sore back, and rather than risk him, they named the legspinner Seekkuge Prasanna for his debut.

Things started to look up when Tillakaratne Dilshan won the toss and chose to bat on a pitch that, compared to last week's Galle dustbowl, seemed like a road. It was the last thing that went right for Sri Lanka for the entire day. They stumbled to 14 for 3 and Michael Hussey at gully took a screamer to get rid of the centurion from the first Test, Mahela Jayawardene, but there was one moment that encapsulated the day.

It came when the world's fifth-ranked Test batsman was dismissed by the 125th-ranked bowler. Kumar Sangakkara had been steering Sri Lanka out of trouble, and had made a patient 48 when Michael Clarke asked Hussey to have a trundle. Hussey, 36, delivers gentle medium-pacers and had taken only two Test wickets: Paul Harris and Dwayne Bravo, both of whom had been caught in the deep.

However, Sangakkara's concentration lapsed and he prodded Hussey's third ball straight to short cover. Hughes took the catch, the Australians mobbed Hussey, and he went on to complete a wicket maiden. Hussey was in shock. So were Sri Lanka.

The only highlight for the hosts was a fighting half-century from Angelo Mathews, who showed similar resilience in the first Test. He played some fine strokes, including lofting a six off Nathan Lyon's offspin, but even more impressive was the six he slammed down the ground off Harris to bring up his fifty.

But Mathews was running out of partners, and he was caught behind for 58 when he chased Mitchell Johnson, and the end came quickly for Sri Lanka. The final wicket arrived when Chanaka Welegedara was taken at third slip by Trent Copeland off the bowling of Johnson, and Sri Lanka's 174 was their fifth-lowest total batting first in a Test at home.

As if to rub it in, Watson and Hughes then cruised the final session, and Sri Lanka's one moment of hope was when Prasanna appealed for lbw against Watson. The umpire gave Watson not out and Dilshan immediately asked for a referral, which showed the ball struck Watson in the "umpire's call" zone and would have clipped the stumps with the same dubious margin. The uncertainty meant the decision was not overturned, but had the on-field umpire given Watson out, he would have stayed out.

The Sri Lankan fast men hadn't found the same swing and seam movement that Australia's bowlers did in the morning. The first hour was especially difficult for the batsmen, with both Harris and Copeland moving the ball both ways.

Some deliveries in Harris' opening spell were almost unplayable, as he angled the ball in to the right-handers and then moved it away off the seam. However, it was the left-hander Tharanga Paranavitana who was the first victim, for a 12-ball duck, when he got a thin edge behind to a ball that went on with the natural angle from over the wicket.

Copeland then produced a near perfect offcutter to get rid of Dilshan for 4. Dilshan has struggled to find the right rhythm in this series, either playing too many shots or too few, and this time it was the latter that brought his downfall when he shouldered arms to a delivery that nipped back sharply off the seam and clipped the very top of the off stump.

But the most uplifting moment for the Australians in the early stages came when Hussey, the oldest player in their team, hurled himself to his left at gully to take a brilliant one-handed catch. Jayawardene had got a thick edge off Copeland and the ball was almost past Hussey when he clutched it in his left hand, and he was quickly mobbed by his team-mates.

Sangakkara and Thilan Samaraweera steadied with a 43-run partnership before Samaraweera (17) was caught behind off the inside edge, the victim of another Harris delivery that nipped in off the seam. He was followed soon after by Prasanna Jayawardene, who blasted a quick 18 but fell in the first over from Lyon, when he mistimed a sweep and was caught at deep midwicket.

Prasanna was one of several batsmen who let themselves down with poor judgment, and the Sri Lankans must come out of their slump quickly if they want to keep the series alive. If the second day is anything like the first, this time on Friday it might all be too late.