Nayar seemed relieved after scoring his century and said, "After the first two games (in which he scored hundreds) I have got seven fifties and most of the time I was left not out. I was quite frustrated with that. My manager kept telling me you need to get hundreds, it is not about fifties. I told him, when the time is right, I will. I was happy to get one today. 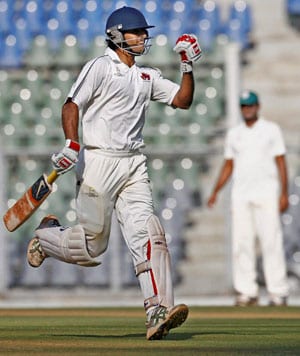 All-rounder Abhishek Nayar, leading run-getter for 39-time Ranji champions Mumbai this season, on Monday said that he has made some changes to his stance with the help of former coach Pravin Amre, which seem to have paid dividends.

"I have been working very hard with Pravin Amre. I make sure I am in touch with him before every game and work on whatever we have done or make sure I have my videos sent to him, and see what I need to do," said Nayar after scoring an unbeaten ton against Baroda in the Ranji Trophy quarterfinal at the Wankhede Stadium.

"(Today) I was trying to stand way out of the leg stump, I was shuffling a lot more and I didn't want to fall across. I was looking to play straight and make sure that I had enough time to hit the ball through the on-side and off-side.

"I opened up my stance a bit so that my leg doesn't go across and I don't fall over. It was a conscious effort I made in the last game and this game. We are working on it so that I don't repeat my mistakes, what I did last year," he said.

He has notched up three tons and seven fifties and is now hopeful of earning a recall to the Indian team with his recent performance in the Ranji.

"Obviously I am playing for a bigger reason than just making runs. I obviously want to get back into the Indian team and do well there as well. My target is right up there, so I am trying to make sure that I push myself to the limit and get the best out of myself," said the left-handed batsman, who bowls right arm medium pace and has played in three ODIs so far.

Nayar seemed relieved after scoring his century and said, "After the first two games (in which he scored hundreds) I have got seven fifties and most of the time I was left not out. I was quite frustrated with that. My manager kept telling me you need to get hundreds, it is not about fifties. I told him, when the time is right, I will. I was happy to get one today."

The 29-year old said his stint with ex-India batsman Amre has been quite useful.

"I worked on everything I could with Pravin Amre in the off season. We decided, however the tournament goes, the way I am batting, we will keep trying some changes and make it better," he added.

Asked about the target in mind for the ongoing game, in which Mumbai have piled up over 500 runs with four wickets in hand, Nayar said, "It is a five-day game, so we can keep working and keep battingÂ  and try and pile on as many runs we can in the first innings.

"Obviously we are trying to play just one inning and try not make it to two innings and get as many runs as we can, so that is the target as of now. We are just trying to bat and get enough runs to win this game easily."

Nayar, who shared a 70-run stand with nightwatchman Dhawal Kulkarni and a 123-run stand with Aditya Tare, said he looked to forge partnerships to post a huge total.

"Initially when I went to bat, we just wanted to bat through, because we had lost Wasim (Jaffer) early and I was batting with Dhawal, so I was trying to make sure that we build on partnerships because the partnerships you have, the bigger total you can have on this kind of track.

"We are looking to bat as much as we can, so once the ball starts turning like it is a bit now, we can make the most of it. I was just trying to build a partnership with whoever comes onto bat and get as many runs as we can on board," he said.

Comments
Topics mentioned in this article
Cricket Wasim Jaffer Vikram Solanki Irfan Pathan Paul Valthaty Virat Kohli Abhishek Nayar Pravin Kalyan Amre MUM
Get the latest updates on IPL 2021, check out the IPL 2021 Schedule and Indian Premier League Live Score . Like us on Facebook or follow us on Twitter for more sports updates. You can also download the NDTV Cricket app for Android or iOS.