The win has moved Afghanistan to within striking distance of the crucial second spot in the competition, only one point behind the United Arab Emirates (UAE) and the Netherlands. 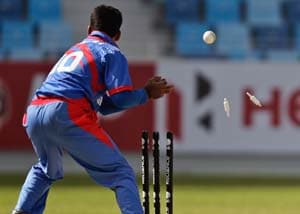 Afghanistan moved to within just one victory of a place in the World Cup 2015 after beating Kenya by eight wickets in the first of two one-day internationals at Sharjah Cricket Stadium on Wednesday.

In reply, Nawroz Mangal hit three fours and four sixes in a 60-ball 52, and Mohammad Shahzad scored a 41-ball 33 as Afghanistan achieved victory for the loss of two wickets inside 18 overs.

The two openers put on 79 runs for the first wicket in just over 16 overs.

The win has moved Afghanistan to within striking distance of the crucial second spot in the competition, only one point behind the United Arab Emirates (UAE) and the Netherlands.

Should Afghanistan win the second ODI on Friday, also in Sharjah, they would climb to 19 points, secure second position behind Ireland and qualify for their maiden ICC Cricket World Cup.

However, if Afghanistan lose Friday's 50-over match - the last of the competition, second-ranked UAE will retain their position and qualify for their first ICC Cricket World Cup since 1996.

"It's a big achievement for Afghanistan cricket and Afghanistan to qualify for the World Cup in 2015," Afghan captain Mohammed Nabi said.

Kenya coach Robin Brown said his young, developing side could only benefit from playing in final round encounters.

"It's still really a young side, and a bit inexperienced. We've got a very good development programme coming through. The board assists them, so I think there is room for improvement, but I think it is definitely working.

"We will try and do the UAE a favour on Friday by trying to spoil the party for Afghanistan!"

Comments
Topics mentioned in this article
Nawroz Mangal Cricket Netherlands West Indies Cricket Team Kenya
Get the latest updates on Fifa Worldcup 2022 and check out  Fifa World Cup Schedule, Stats and Live Cricket Score. Like us on Facebook or follow us on Twitter for more sports updates. You can also download the NDTV Cricket app for Android or iOS.