Resuming at 272 for three, Mumbai lost their set batsman Jaffer, who was unbeaten on 137 overnight, in the seventh over of the day. 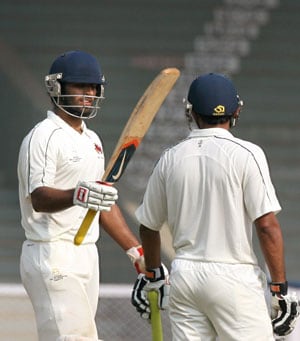 It was due to Nayar's third century of this Ranji season that the hosts scored more than 500 runs by the end of second day's play at the Wankhede Stadium.

The in-form batsman scored his runs off 217 balls, striking 12 fours. He forged a 123-run partnership with Aditya Tare.

The Mumbai wicket-keeper, Tare, was caught behind off Abhimanyu Chauhan after a well-made 64, which came off 160 balls.

Resuming at 272 for three, Mumbai lost their set batsman Jaffer, who was unbeaten on 137 overnight, in the seventh over of the day.

Jaffer's knock was laced with 18 fours and three sixes. He was bowled by Gagandeep Singh Natt, when he got a thick edge, as the ball disturbed the stumps.

Baroda skipper Yusuf Pathan's woes continued as he dropped a sitter in the first slip, the lucky batsman being night watchman Dhawal Kulkarni.

Kulkarni, who was later caught behind off pacer Murtuja Vahora, could only manage 27. He hit four fours and a six, and added 70 runs with Nayar for the fifth wicket.

Murtuja Vahora was the pick of the bowlers for Baroda, claiming three wickets while Gagandeep, Bhargav and Chauhan grabbed one each.

Comments
Topics mentioned in this article
Cricket Sachin Ramesh Tendulkar Wasim Jaffer Paul Valthaty Abhishek Nayar MUM
Get the latest updates on ICC T20 Worldcup 2022 and CWG 2022 check out the Schedule, Live Score and Medals Tally. Like us on Facebook or follow us on Twitter for more sports updates. You can also download the NDTV Cricket app for Android or iOS.