AB de Villiers has been rewarded for his series aggregate of 212 runs by earning 13 ratings points which have given him a career-best rating of 885. 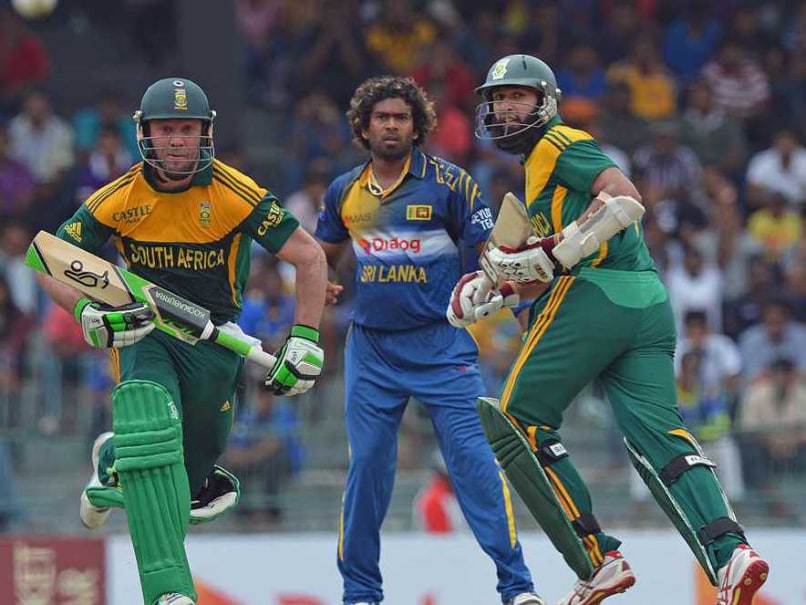 South Africa's maiden ODI series win in Sri Lanka has helped it, as well as its players, to make upward movements in the latest ICC ODI Rankings, which were released on Sunday. South Africa won the third and final ODI by 82 runs and claimed the series 2-1.

South Africa players have also benefitted from the series as most of the highest-ranking players have moved in the right direction. In the batting rankings, Hashim Amla is now sitting just behind his captain and number-one ranked AB de Villiers after finishing the series as the leading run-getter with 258 runs. Amla, who scored centuries in the opening two matches, has gained two places and now trails de Villiers by 17 ratings points.

De Villiers has been rewarded for his series aggregate of 212 runs by earning 13 ratings points which have given him a career-best rating of 885.

Quinton de Kock, who represented South Africa in the ICC U19 Cricket World Cup 2012 in Townsville, has moved up two places to a career-best 11th ranking following his series contribution of 159 runs that included a 128 in the last ODI in Hambantota.

David Miller is the other South Africa batsman to make gains in the latest rankings. The left-handed batsman has earned five places and is now sitting in 40th position.

In the ODI bowling rankings, fast bowler Ryan McLaren and wrist spinner Imran Tahir have achieved career-best rankings. McLaren, who was the most successful bowler of the series with nine wickets, has broken into the top 10 in 10th position after jumping 10 places. Tahir, who claimed six wickets, has rocketed 32 places to occupy 51st spot.

JP Duminy 63rd (up five places) and Vernon Philander 87th (up six places) are the other South Africa bowlers to head in the right direction.

However, there was discouraging news for Duminy, Faf du Plessis and Jacques Kallis who have slipped in the batting charts. Duminy has fallen seven places to 29th, Kallis has dropped four places to 40th and du Plessis has slipped three places to 54th.

In the bowling, both Dale Steyn and Morne Morkel have slipped to fourth and eighth, respectively, after conceding two places each.

For Sri Lanka, captain Angelo Mathews and Ajantha Mendis have made the most of the series. Mathews' 105 runs in three matches have helped him gain two places to put him in 22nd spot, while Mendis' seven wickets have allowed him to move up seven places to 32nd position.

Lasith Malinga has moved up one place and is now in 21st spot while Tillakaratne Dilshan has gained five places in the bowling table and is now in 67th position.

With the World Cup 2015 starting in Australia and New Zealand in seven months, only six ratings points separate the top five sides. with South Africa to play at least 17 ODIs before they opens their World Cup campaign against Zimbabwe in Hamilton on February 15. While these matches will help South Africa to prepare for the mega event, they will also provide it with the chance to surge to the top of the ODI team rankings.

Comments
Topics mentioned in this article
AB de Villiers Hashim Amla South Africa Cricket Team International Cricket Council Cricket
Get the latest updates on ICC Women's Cricket World Cup 2022 and IPL 2022, check out the Schedule , Live Score and IPL Points Table. Like us on Facebook or follow us on Twitter for more sports updates. You can also download the NDTV Cricket app for Android or iOS.