AB de Villiers admitted he was not happy to lose out to Hashim Amla in South Africa's Test captaincy race but was confident that the new skipper would have a successful reign.

World's No.2 ranked ODI batsman AB de Villiers has confessed he was "disappointed" to lose out on the South African Test captaincy but promised to extend complete support for Hashim Amla, the new skipper.

After former South Africa skipper Graeme Smith announced a shock retirement earlier this year in March towards the end of the Test series against Australia at home, it was understood that either of Amla or de Villiers, the ODI captain, would take over the mantle in the longest format. 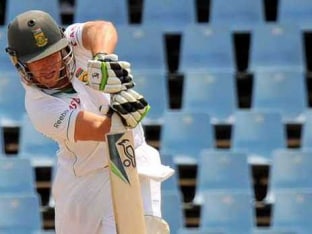 Cricket South Africa decided to appoint Amla, who with 76 Test appearances so far has been the most consistent Proteas batsman in recent times, scoring 21 hundreds. The 31-year-old from Durban was by no means a surprise choice but since de Villiers has been leading the ODI side for the last three years, many might have thought him to be slightly ahead in the race.

However, de Villiers appears to have taken the 'rejection' in his stride and as vice-captain of the Test team, has vowed all his help to Amla, in an interview with leading South African daily 'Beeld'.

"I will not beat around the bush. I'm disappointed that I'm not the captain," said de Villiers.

"Everyone has dreams and ambitions and hopes they will become reality but I accept the situation and will not let it come between me and Hashim. It would be very stupid of me if I let it affect my game and my role in the team. The choice is made. I wish Hashim all the best and will give him all of my support. As vice-captain of the team I will closely work with Hashim and believe we can make a good combination."

De Villiers, considered to be the best batsman in the world today, ahead of the likes of Virat Kohli and Michael Clarke, has scored 19 hundreds from 92 Test matches. He had even volunteered to give up his wicket-keeping role after Smith quit. However, having been turned down, de Villiers was quick to suggest that he was confident of a successful reign for Amla.

"I accept that it is not always moonshine and roses and you can't expect things must always go your way. In the end, we are all working together in the best interests of South African cricket. I believe Hashim will make a success of the assignment. He is a very experienced and senior player and is a fine student of the game. We will all pull in the right direction do to make sure our cricket comes out on top again."

Convener of selectors, Andrew Hudson said a group of senior players were consulted before the announcement was made. It is possible that some stars within the South African set-up would have preferred Amla over the flashier de Villiers. How this pans out for the South Africans as a team will soon be clear when they travel to Sri Lanka for three ODIs and two Tests next month.