Martin Guptill roared back from injury with a record-breaking 180 as New Zealand thrashed South Africa by seven wickets to level the one-day international series in Hamilton on Wednesday. 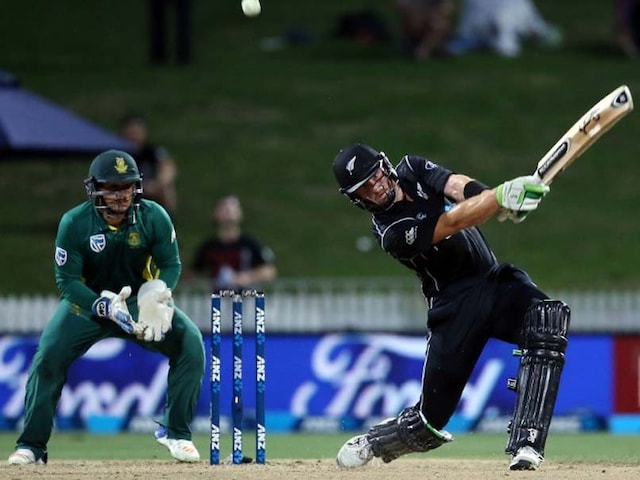 Martin Guptill roared back from injury with a record-breaking 180 as New Zealand thrashed South Africa by seven wickets to level the one-day international series in Hamilton on Wednesday. Guptill's score was the highest by a New Zealander in an ODI chase and allowed the Black Caps to overhaul the 280 target set by South Africa with five overs to spare. The result avenges the New Zealanders' 159-run loss in the previous match and levels the five-match series 2-2, setting up a decider in Auckland on Saturday.

It was a stunning return for Guptill, who showed no ill effects from being sidelined for five weeks with hamstring problems.

He posted the highest-ever ODI score by a New Zealander against the Proteas and his 180-run partnership with Ross Taylor (66) was also a new benchmark against South Africa.

"It was one of those innings where everything went to plan," Guptill said.

"But I've got to park it pretty quickly because we've got another game in Eden Park in a few days."

Hitting the ball crisply from the outset, Guptill debunked expectations that the Seddon Park pitch would become a spinners' paradise as the match wore on.

The opposite proved true, with Black Cap spinner Jeetan Patel enjoying early success before batsmen from both sides showed runs were there for the taking on an increasingly docile deck.

It meant South Africa's total of 279 for eight -- made after winning the toss and opting to bat -- was not as challenging as it initially appeared.

Captain AB de Villiers top-scored for the Proteas with an unbeaten 72, while Faf du Plessis made 67, Hashim Amla 40 and Wayne Parnell 29 off 12 balls.

With South Africa looking shaky at 158 for six, de Villiers worked with Chris Morris (28) and Parnell to give them a defendable total.

De Villiers said it should have been enough. He refused to use Guptill's outstanding form as an excuse for his side, blaming their failure to take wickets.

"It was a fantastic knock by Martin, he looked unstoppable tonight, but there are areas where we need to improve and we'll be working on that," he said.

South Africa were helped by a New Zealand attack that again failed to apply pressure at the death, bleeding 72 runs off the final five overs.

But it was Guptill who proved their salvation, rapidly bringing up 50 off 38 balls.

He was given out lbw on 62 but the decision was overturned on review and Guptill went on to make 100 off 82 balls, his 12th ODI century.