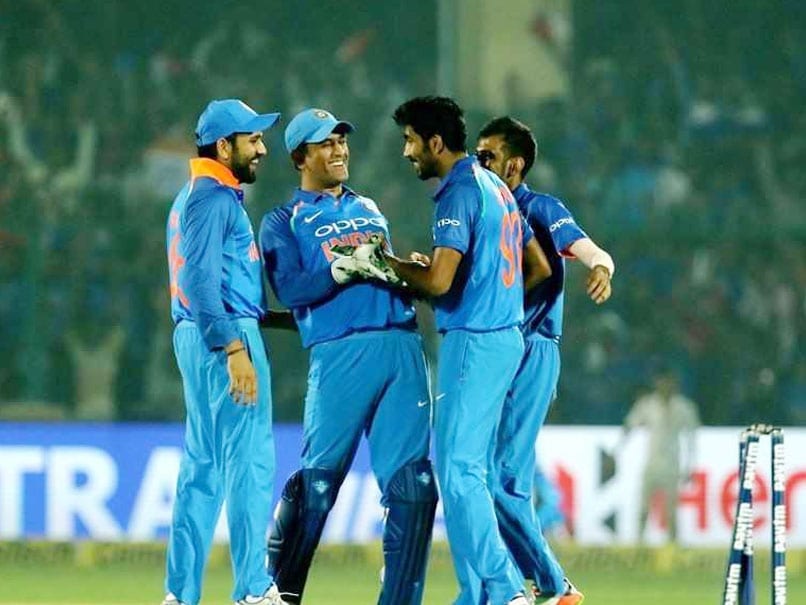 A disciplined bowling display from the bowlers in Thiruvananthapuram helped India earn their first bilateral Twenty20 series win against New Zealand as the visitors fell short by six runs in the decider to lose the three-match series 1-2 in a rain-curtailed 8-over-a-side match. Jasprit Bumrah (2/9) and Yuzvendra Chahal (8 runs in 2 overs) starred with the ball as the batsmen could not catch up with the ever-rising required run-rate. For New Zealand, Colin de Grandhomme was the only saving grace who remained not-out on 17.

Playing spoilsport, the rains reduced the decisive match of the series and first ever International match at Greenfield Stadium to an eight-overs per side affair.

Stroke-making was not easy under the conditions and all the hosts could manage to put on board was 67 for five, featuring only seven boundaries, including three sixes.

However, the Indian pacers and spinners bowled their hearts out in a short but exciting contest. They were well supported by agile fielders.

A wily Bhuvneshwar Kumar mixed it up nicely after being hit for a gigantic six by Colin Munro (7) while Jasprit Bumrah was splendid with his line and length.

Bhuvneshwar cleaned up Martin Guptill (1) with a slower one while Bumrah saw the back of dangerous Munro.

The early wickets pegged New Zealand back and they could never settle and eventually buckled under pressure.

Young leg-spinner Yuzvendra Chahal too contributed in choking the Kiwis, giving away only eight runs in his quota of two overs.

Hardik Pandya bowled the last over with the Kiwis requiring 19 runs. A massive six by Colin de Grandhomme threw tension in the air for the home fans but Pandya managed to pull it off.

Earlier, Both Shikhar Dhawan (6) and Rohit Sharma (8) struggled to time the ball, with Trent Boult having a perfect bowler-friendly platform to execute his skills.

Kane Williamson handed the ball to Mitchell Santner to bowl the second over and the left-arm spinner surprised the Indians with some vicious turn.

The Indian openers had no choice but to go after the bowlers and lost their wickets in successive balls from Tim Southee at the start of third over. Both of them were caught by Santner.

Virat Kohli tried to lift the gloom by smashing Ish Sodhi for a four and six but the Indian skipper could not clear the ropes in his second attempt and was caught by Boult at deep mid-wicket.

India managed 31 runs in the first four overs and now Shreyas Iyer (6) and Manish Pandey (17) needed to provide impetuous to the innings.

Pandey lofted Sodhi over long-on for a six but Sodhi, like the Rajkot match, used his variations nicely to trouble the Indians and had Iyer caught by Guptill.

Hardik Pandya (14 not out) made his presence felt with a massive hit off Santner but could not get any more big shot. Pandey became victim of exceptional athleticism from Santner at the deep.

Pandey hoicked Boult, attempting six, but a full-stretched air-borne Santner not only stopped the ball from soaring over the ropes but threw it towards de Grandhomme for an easy catch.

Comments
Topics mentioned in this article
India Cricket Team New Zealand Cricket Team Virat Kohli Yuzvendra Chahal Jasprit Bumrah India vs New Zealand Cricket
Get the latest updates on IPL Auction 2023 and check out  IPL 2023 and Live Cricket Score. Like us on Facebook or follow us on Twitter for more sports updates. You can also download the NDTV Cricket app for Android or iOS.