Azhar Ali smashed 157 and Mohammad Hafeez missed a double century as Pakistan continued their batting feast in the second Test against Sri Lanka on Sunday, before persistent rain halted play early on the second day. 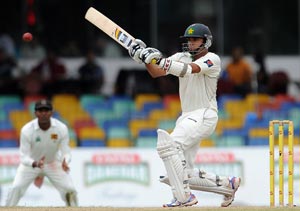 Azhar Ali smashed 157 and Mohammad Hafeez missed a double century as Pakistan continued their batting feast in the second Test against Sri Lanka on Sunday, before persistent rain halted play early on the second day.

Hafeez fell for 196 and Azhar equalled his highest score as the tourists moved from their overnight score of 334-1 to 488-4 by tea, but there was no further play possible after tea due to the rain at the Sinhalese Sports Club in Colombo.

Heavy rain on either side of lunch and another wet spell just before tea allowed just 18 overs to be bowled in the afternoon session, in which Pakistan scored 84 runs.

Azhar, who put on 287 for the second wicket with Hafeez, added 70 for the third with Younus Khan (32) and 51 for the fourth with Misbah-ul Haq (29 not out), the Pakistan captain.

Azhar, who was on 92 overnight, took an hour to reach his hundred by smashing seamer Nuwan Pradeep to the point fence after being stranded on 99 for 20 agonising minutes.

It was the Lahore batsman's third century and the second in his last three Tests after making 157 against England in Dubai in February. But Azhar gifted his wicket just before tea with a reckless reverse sweep off Suraj Randiv which lobbed easily to Nuwan Kulasekara at point.

Younus, given out leg-before to Rangana Herath, appeared unhappy at the decision of Simon Taufel, the umpire. Television replays proved inconclusive.

Pakistan, who were sent in to bat by Sri Lanka, trail 1-0 in the three-match series after losing the first Test in Galle by 209 runs.

The second-wicket pair of Hafeez and Azhar toned down their aggressive approach on the second morning to frustrate a rival attack looking for quick wickets to stem the flow of runs. The partnership between Hafeez and Azhar was the highest on Sri Lankan soil for any wicket, surpassing the 258 by Mike Hussey and Shaun Marsh for Australia at Pallekele last year.

Hafeez fell short of a coveted 200 when, after a patient knock that lasted seven hours and included 20 fours and a six, he was bowled attempting a wild heave off Herath to reach the landmark before lunch.