At the end of the rain-abbreviated second day, in which only 63.1 of the scheduled 90 overs were bowled, the West Indies trailed New Zealand's first innings of 441 by 283. 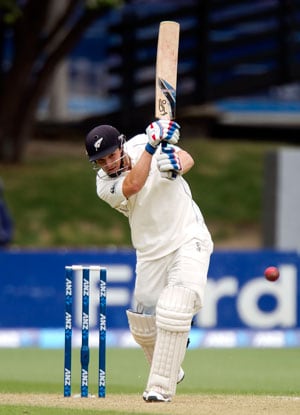 New Zealand claimed the upper hand in the second Test on Thursday with the West Indies on 158-4 and key batsmen Darren Bravo and Shivnarine Chanderpaul back in the pavilion.

At the end of the rain-abbreviated second day, in which only 63.1 of the scheduled 90 overs were bowled, the West Indies trailed New Zealand's first innings of 441 by 283.

Only Kirk Edwards and Marlon Samuels provided any stern resistance with well compiled half centuries. Samuels was not out 50 and Narsingh Deonarine was on 11.

New Zealand all-rounder Corey Anderson, in only his fourth Test, made the crucial breakthroughs for his team, removing first Test double centurion Darren Bravo for four and Edwards for 55.

The West Indies made a positive start as Edwards and Kieran Powell progressed to 46 with New Zealand new-ball partners Trent Boult and Tim Southee moving the ball around and finding plenty to appeal about but nothing that impressed the umpires.

Southee was eventually rewarded with an lbw decision against Powell on 21 while Boult came back in his second spell to remove Chanderpaul.

Bravo, unable to reproduce his marathon innings of the first Test, faced 12 balls before he edged Anderson to second slip Peter Fulton.

Edwards, who had looked assured on his way to a half century, was undone by a full Anderson delivery which he tried to turn to the leg side but sent a leading edge to Hamish Rutherford at cover.

Anderson, who has figures of two for 20, was again in the play to remove Chanderpaul for six when he took a fine catch at cover point.

New Zealand resumed the day at 307-6 and cracked a rollicking 134 runs to be all out on the stroke of lunch.

It was an impressive total on a wicket rated favourable to the quick bowlers, although the West Indies were guilty of too many short, wide, deliveries.

Wicketkeeper BJ Watling (in pic) was the mainstay of the late attack which ended when he was removed for 65.

Watling and Southee opened the day with 27 runs in 26 balls before Southee was dismissed, caught at deep square leg for 21.

Ish Sodhi chimed in with 27 off 35 balls in a cameo peppered with quick singles before he was caught behind off Tino Best who was quickly to go from hero to villain.

Best removed Neil Wagner with his next ball to be on a hat-trick only for Boult to crush those hopes.

He not only avoided the hat-trick but in the next over he skied a Shane Shillingford delivery, which Best spilled over the ropes, turning a chance to wrap up the innings into a six.

Boult was particularly severe on Shillingford, belting 14 off one over, as he and Watling set a record 10th-wicket partnership for New Zealand against the West Indies of 58

Best was the most successful of the West Indies bowlers, with four for 110.

The day's play was twice disrupted by rain, with the start delayed by 75 minutes and the entire middle session washed out.