A stunning 5-ball 20 from Kane Williamson saw New Zealand over the line in Hamilton, as the hosts chased down Zimbabwe's 201 in Hamilton, with five wickets and two balls to spare. 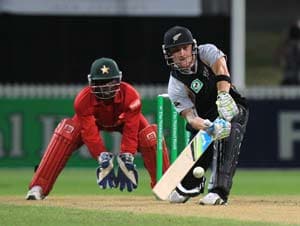 A stunning 5-ball 20 from Kane Williamson saw New Zealand over the line in Hamilton, as the hosts chased down 201 in Hamilton, with five wickets and two balls to spare.

The chase had been set up by fifties to openers Rob Nicol and James Franklin, but with New Zealand needing 21 from 9 balls and two new batsmen at the crease, Zimbabwe seemed to have the match sewn up. But Williamson's classy cameo ensured his side overcame the visitor's first serious challenge of the tour, and Zimbabwe will now leave New Zealand without having won a match.

Williamson's line in the scorebook read 4,2,4,6,4 as he coolly reeled in Zimbabwe's total with timing, placement and nous, in a match filled with heavy hitting. His first ball was lofted square on the leg side, dissecting deep square leg and deep midwicket perfectly, before he did the same on the off side from his third delivery, to leave New Zealand leaving nine from four. He sealed the result next ball, pouncing on Shingi Masakadza's half volley to send it over long-on, before finishing the match with an upper-cut.

Zimbabwe's total had been set up by another measured innings, that proved the enduring value of class and composure in the shortest form. Brendan Taylor began his 43-ball 75 slowly, but surged at the finish, manipulating the field with calculated strokes around the wicket. New Zealand's bowlers helped Zimbabwe's cause by missing the yorker length regularly, but the mistakes were forced by Taylor, whose ability to find gaps propelled Zimbabwe to 200, and even saw the visitors dominate the opposition attack for the first time on tour. Hamilton Maskadza's belligerent fifty - his second on the trot - also deserves mention as he and Stuart Matsikenyeri laid the base for Zimbabwe with an opening stand that brought 76 in seven overs.

Zimbabwe's batting may have come to life, but their fielding began as woefully as it has been all summer, as Malcolm Waller's poor throw from the outfield ruined a straightforward chance to run Nicol out in the second over. Nicol had struck New Zealand's first boundary three balls earlier - a flat batted six over wide long-on - and scored the bulk of his side's early runs, while James Franklin could scarcely lay bat on ball.

A challenging chase had been made harder for New Zealand by the absence of Martin Guptill, who had made a half-century in each outing against Zimbabwe and provided the early impetus for the New Zealand innings. Nicol did a fair impression though, picking three fours and two sixes on the on-side to motor to 32 from 19 by the end of the fifth over.

Franklin found his feet eventually, after tight overs from Prosper Utseya and Ray Price pushed the required run rate towards 12. His two successive sixes in the eighth over sparked a 12-ball burst in which New Zealand belted six sixes and a four, to plunder 46 and haul that rate in.

Nicol made his first Twenty20 fifty off 34 balls, but departed soon after - Brendon McCullum stepping into his role as prime aggressor, while Franklin completed a half-century himself. New Zealand seemed to be coasting at 135 for 1 at the start of the 14th over, but Franklin's demise for 60 was the first in a string of wickets for Zimbabwe, that set up a tight finish.

Colin de Grandhomme, who had played for Zimbabwe under-19s alongside Taylor, Utseya and Waller before moving to New Zealand, made only 8 before edging Shingi Masakadza onto his stumps, and having left themselves 26 to win from the last two overs, the McCullum brothers perished on the boundary off consecutive deliveries.

Comments
Topics mentioned in this article
Cricket Pakistan Cricket Team New Zealand Cricket Team Zimbabwe Cricket Team Kane Williamson Brendon McCullum Shingirai Masakadza Colin de Grandhomme
Get the latest updates on SA vs IND 2021-22, check out the Schedule and Live Score . Like us on Facebook or follow us on Twitter for more sports updates. You can also download the NDTV Cricket app for Android or iOS.