Sri Lanka secured their first Test win over Australia in 17 years as they defeated the World No.1 side by 106 runs to take a 1-0 lead in the three-match series. 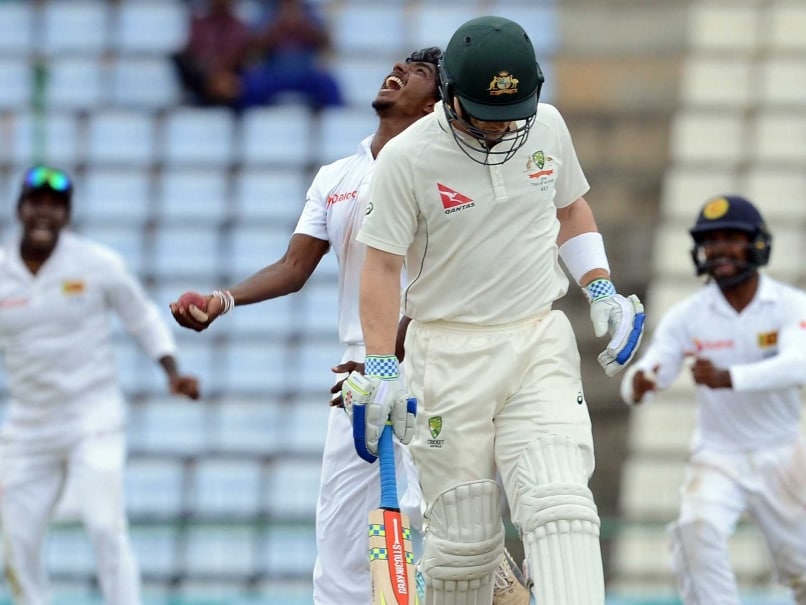 Australia floundered against Rangana Herath and Lakshan Sandakan on the fifth day.© AFP

Herath, 38, grabbed 5-54 to help the hosts bundle out Australia for 161 on the fifth and final day after they were set a challenging 268 in the second innings.

Herath bagged the last Australian wicket to fall by cleaning up O'Keefe to trigger wild celebration in the Lankan camp. This was Sri Lanka's only second Test win against Australia in 27 matches.

It was batsman Mendis (176) who set up the unlikely win for Sri Lanka with his superb maiden ton in his team's second innings after the hosts overcame an 86-run deficit.

The 21-year-old Mendis, the only centurion in a low-scoring contest, played a memorable 254-ball knock laced with 21 fours and a six.

For Lankan spinners it was a race against time as rain threatened to thwart their chances of upsetting firm favourites Australia but Herath had other ideas in mind.

The left-arm spinner, who grabbed four wickets in the first innings, made life miserable for the Australian batsmen on a turning track on the fifth morning.

Smith, whose 55 was the next best after Mendis' century, was trapped LBW by Herath as Australia slipped to 141 for seven at lunch.

"The old man Herath was brilliant once again. Sandakan is a brilliant find for us. We knew that the wicket was going to take turn and Sandakan responded brilliantly," said Mathews.

O'Keefe, who was ruled out of the remainder of the series after injuring his hamstring Thursday, surprised the opposition by turning up at the crease Saturday.

O'Keefe and Nevill resisted stoutly with one eye on the skies but could only delay the inevitable.

"Tough week, credit to Sri Lanka the way they played. We let ourselves down with the bat, we weren't disciplined with the bat. Credit to Kusal, his 176 turned the game," said Smith.

"Anything above 260 on this wicket was always going to be difficult. It's tough to lose O'Keefe but that's cricket. We have got to find our plans and find ways to play in these conditions."

Sri Lanka lead the three-match series 1-0 as the action shifts to Galle for the second Test beginning August 4.