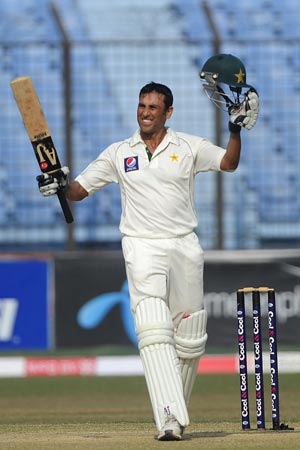 Veteran Younis Khan led a Pakistan fightback after his side lost three early second-innings wickets on the third day of the first Test against Zimbabwe at the Harare Sports Club on Thursday.

Younis and fellow veteran, captain Misbah-ul-Haq, ground out a fourth-wicket stand of 116 after their side, who trailed by 78 runs after the first innings, slipped to 23 for three against Zimbabwe's new ball bowlers Tinashe Panyangara and Tendai Chatara.

It was slow going against accurate bowling on a pitch of occasional low bounce. The partnership occupied 48.4 overs and Pakistan were still in trouble when Misbah played too early at a slower ball from Shingi Masakadza and gave a simple catch to cover. Misbah made 52 off 157 balls, with four fours.

Younis and Asad Shafiq saw out the day and will resume on Friday, with a new ball due after 10 more overs. Younis, who came to the crease soon after lunch, had faced 174 balls by the close and hit seven fours, while Shafiq was 15 not out.

They will aim to take their side to a total which will give off-spinner Saeed Ajmal a chance of bowling Zimbabwe out. Ajmal took seven for 95 in Zimbabwe's first innings of 327.

Ajmal took all three Zimbabwe wickets that fell on Thursday as the host nation added 46 runs to their overnight 281 for seven. It was his eighth haul of five or more wickets in Tests, but his best figures remain seven for 55 against England in Dubai in January 2012.

Elton Chigumbura became the third Zimbabwe batsman to score a half-century, making 69 before he was ninth out, caught off bat and pad at short leg by Azhar Ali after a 129-ball innings which included eight boundaries.

Pakistan made a disastrous start to their second innings, losing Khurram Manzoor before lunch, with Azhar Ali and Mohammad Hafeez following soon after the interval.

Tinashe Panyangara took two wickets for 12 runs in an opening spell of eight overs. Predominantly swinging the ball away from the right-handed batsmen, he gained both his wickets with deliveries which cut back, trapping Manzoor and Azhar leg before wicket.