Opener Dimuth Karunaratne fell seven runs short of a deserved century as he anchored Sri Lanka's fightback on the opening day of the first Test against Pakistan in Abu Dhabi on Thursday. 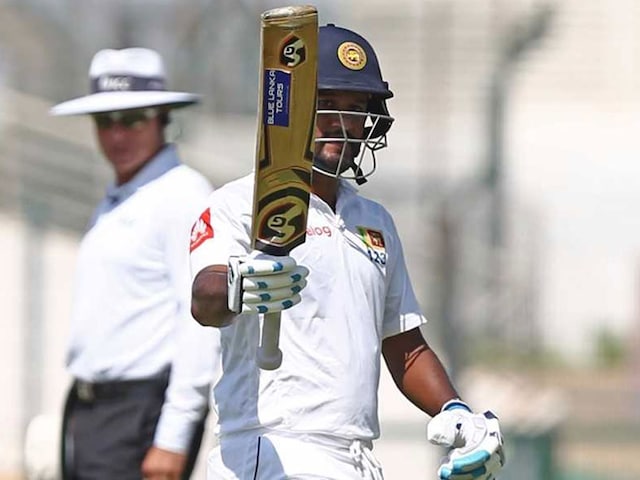 Dimuth Karunaratne was run out for 93 runs.© AFP

Opener Dimuth Karunaratne fell seven runs short of a deserved century as he anchored Sri Lanka's fightback on the opening day of the first Test against Pakistan in Abu Dhabi on Thursday. The left-hander was run out for 93 but helped his team recover from a precarious 61-3 to reach 227-4 at close after Sri Lanka won the toss and batted on a greenish Sheikh Zayed Stadium pitch. Karunaratne added an invaluable 100-run partnership with skipper Dinesh Chandimal, who was 60 not out at stumps, as Pakistan failed to break through with the second new ball.

Niroshan Dickwella was unbeaten on 42, having added 66 runs for the unbroken fifth-wicket stand alongside his captain.

Chandimal was given leg before to Yasir Shah on 42, a decision which was overturned on review. His innings has included six boundaries while Dickwella hit five fours and a six during his aggressive knock.

Shah returned figures of 2-59 but didn't get much turn from the pitch while seamer Hasan Ali took 1-58.

It was Karunaratne's knock that brought Sri Lanka back into it in the last two sessions. He batted for four hours and 40 minutes during an obdurate stay at the crease, recording his fourth half-century against Pakistan and sixth overall.

But he was run out in the last session as he attempted a quick single only to be left stranded after Chandimal at the non-striker's end sent him back.

Karunaratne said the pitch had made life challenging for the batsmen.

"We did quite well in the first hour, but lost two wickets after that. But then we managed to pull things back. It's not an easy wicket to bat on. Not easy to get runs quickly and you've got to wait for those loose balls," he said.

Karunaratne refused to lay the blame for his run out solely on his skipper.

"It's part of the game and it happens when you play cricket. Can't say entirely his fault, partly mine too," said Karunaratne, adding, "a total of 350 or 400 would be great".

Pakistan had the advantage in the first session with leg-spinner Shah taking two wickets, dismissing left-hander Lahiru Thirimanne for his 150th Test wicket.

Shah matched fellow countryman Waqar Younis as the joint second fastest to 150 wickets -- both achieving the milestone in their 27th Test.

Australia's Sydney Barnes holds the record after reaching the landmark in just 24 Tests.

At the start, Karunaratne had a solid opening stand of 34 with Kaushal Silva before Hasan provided Pakistan with the breakthrough.

Hasan bowled Silva for 12 as the batsman played on to an inswinging delivery.

Shah then had Thirimanne trapped leg before for a duck and Kusal Mendis caught behind for 10 to leave Sri Lanka reeling.

The Test is Pakistan's first since the retirement of legendary batsman Younis Khan and their most successful Test skipper, Misbah-ul-Haq.

Pakistan handed a Test cap to batsman Haris Sohail, while Sri Lanka went into the game with three spinners and two seamers.