The 22-year-old debutant removed Sangakkara (55) with the last ball of his tenth over and then had Jayawardene off the first of his next to leave Sri Lanka at 186-4 in their second innings at close on the third day on a Sheikh Zayed Stadium pitch which had eased out for batsmen. 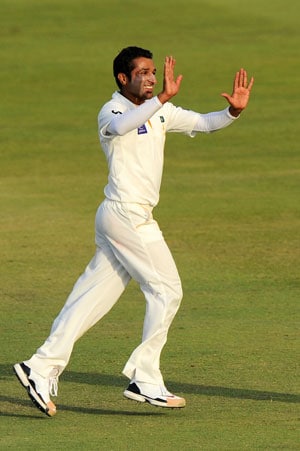 The 22-year-old debutant removed Sangakkara (55) with the last ball of his tenth over and then had Jayawardene off the first of his next to leave Sri Lanka at 186-4 in their second innings at close on the third day on a Sheikh Zayed Stadium pitch which had eased out for batsmen.

Junaid (2-46) built on the strikes by dismissing Kaushal Silva for 81, caught behind in the last over of the day.

Before that Silva and Sangakkara added 99 for the second wicket which had thwarted Pakistan's pace-cum spin attack in the last session.

Dinesh Chandimal was the unbeaten batsman at close with 24 as Sri Lanka, who conceded a 179-run lead in the first innings, are now seven runs ahead with six wickets in hand.

Earlier, Pakistan were dismissed for 383 runs in their first innings in reply to Sri Lanka's 204.

Silva's dismissal has given Pakistan a sniff of victory on fourth day. He hit 11 boundaries during his 275-minute stay and gave Sri Lanka a confident start of 47 with Dimuth Karunaratne (24).

Silva, playing only his fourth Test, used his feet well against spinner Saeed Ajmal and looked comfortable against Pakistani bowling, reaching his maiden half-century with a single off Junaid.

The experienced Sangakkara, who hit an epic double hundred to draw a Test at the same venue against Pakistan in 2011, brought up his 43rd Test fifty with a crisp cut shot off Bhatti for his sixth boundary.

It was Bhatti (2-65) who seeemed to have got Sangakkara on 29 when a sharp delivery trapped the left-hander leg before and English umpire Richard Kettleborough upheld the appeal but the intelligent batsman challenged the decision.

Telvision replays showed the ball was pitched on leg-stump and the umpire had to change the decision.

But Bhatti had the last laugh as he forced an edge off Sangakkara which was smartly snapped up in the slips by Younis Khan.

Next over, Bhatti had a ball rear up from a good length which forced Jayawardene to hand an easy catch to gully for a first-ball duck.

In the morning Sri Lanka's pace and spin attack brought their team back in the game by taking the last six wickets for an addition of just 54 runs after Pakistan resumed the day at 327-4.

Pakistan skipper Misbah-ul Haq scored 135. He hit 16 boundaries and a six off 306 balls before being last man out, caught at long-off off from spinner Herath.

In all Misbah batted for 425 minutes and his 218-run partnership with Younis Khan (136) on Wednesday set Pakistan on track for their big lead.

Pakistan lost Asad Shafiq (13) and Adnan Akmal for six before Bilawal Bhatti (14) helped his skipper add 27 for the seventh wicket.

Comments
Topics mentioned in this article
Cricket Pakistan Cricket Team Sri Lanka Cricket Team Kings XI Punjab Kumar Sangakkara Nathan McCullum Kaushal Silva
Get the latest updates on IPL Auction 2023 and check out  IPL 2023 and Live Cricket Score. Like us on Facebook or follow us on Twitter for more sports updates. You can also download the NDTV Cricket app for Android or iOS.