Spin is expected to play a dominant role as New Zealand arrive to take on West Indies in the first of the weekend's two T20 clashes. 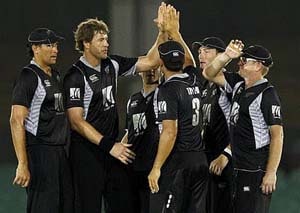 Americans have previously claimed PG Wodehouse is American. Over the next two days, the claim they'll lay to a sport Wodehouse wrote extensively and endearingly on will be of a slightly different nature. It will mostly come from those who have moved to America from cricketing nations, and the Caribbean people have a big presence in Florida. Which is why it makes more sense to have New Zealand - a team committed to development of cricket in US - play West Indies, unlike the last time when Sri Lanka and New Zealand failed to draw big crowds in 2010.

Also, unlike the last time, the organisers will hope for more encouragement from the conditions. New Zealand Cricket did send one of their best groundsmen to inject some life into the slow and low pitches that made for dull cricket the first time around. Jacob Oram, though, is of the view the pitch hasn't changed much. It will obviously take them time to get pitch preparation right in Florida, but it is arguable how much dull contests - with stroke-making difficult and little help for bowlers - will help spread the game there.

New Zealand won't complain about the slow and low conditions, though, because they should level the playing field a little. West Indies are the clear favourites on paper, with Chris Gayle and the many allrounders in their squad. New Zealand, on the other hand, are without Brendon McCullum, Jesse Ryder and James Franklin. A slow and low pitch can help neuter the big hitters to an extent, and those saved and scampered singles will become more important if the T20s there from two years ago are any indication.

This will also be one of the final chances for the two sides to identify their combinations for the World Twenty20 to be held in Sri Lanka.

Watch out for...
Sunil Narine didn't have the best of Test debuts when English conditions and the absence of pressure to score eight-nine runs off his each over got the better of him. Batsmen also kept watching for the thumb sticking out as he entered the delivery stride, which was a clear sign he would bowl an offbreak. Twenty20 on slow and low pitches might be a different story yet again.

Nathan McCullum is another man who'll cherish these conditions. He has been adept at opening the bowling in both forms of limited-overs cricket. In his last Twenty20 in Lauderhill, McCullum bowled four overs for 15 runs and Kumar Sangakkara's wicket. He is now the 10th-highest wicket-taker in all T20Is.

Team news
Given the conditions, legspinner Samuel Badree should make his international debut to give West Indies an extra spinning option. If he does get the nod, Fidel Edwards is the likelier man to miss out 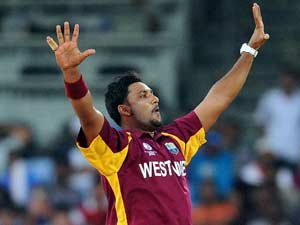 New Zealand will have to rely on atypical T20 batsmen like Kane Williamson and Dean Brownlie. Nor will these games feature sides that will start out in the World Twenty20 because McCullum, Daniel Vettori and Franklin will walk into that team.