The two teams will meet again in the second and final match in Melbourne on Monday. 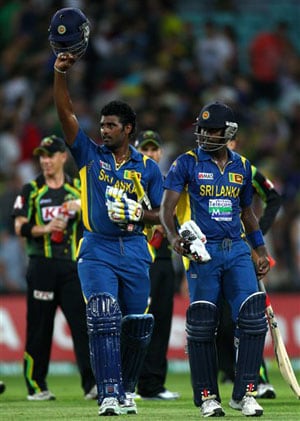 Sri Lanka downed Australia by five wickets to win the opening T20 international at the Sydney Olympic Stadium on Saturday.

Two towering sixes on consecutive balls from Sri Lanka's Thisara Perera sealed a comfortable win for the visitors, who have now beaten Australia in their last four T20s.

The win was set up by some superb bowling from Sri Lankan pair Lasith Malinga and Nuwan Kulasekara, who earlier restricted the Australians to 137-3 from their 20 overs.

The Sri Lankans reached the target with seven balls to spare and are now guaranteed of retaining their number one ranking regardless of what happens in the second and final match in Melbourne on Monday.

Australia earlier won the toss and chose to bat, but apart from big-hitting opener David Warner they found scoring difficult.

The Sri Lankans always had the target well in hand, once openers Kushal Perera (33) and Tillakaratne Dilshan (16) put on 46 runs in 38 balls for the opening wicket.

Kushal, making his international T20 debut, showed no signs of nerves as he took to the Australian fast bowling attack with relish.

He outscored Dilshan, who was hit in the head by a Ben Laughlin bouncer and needed treatment for a cut above his eye.

Australia finally got the breakthrough when Dilshan fell to the spin bowling of Doherty, Laughlin taking a magnificent diving catch at point.

They struck again soon after when Kushal edged Maxwell to wicketkeeper Matthew Wade and Chandimal (5) was caught in the outfield by Ben Cutting off Maxwell.

Doherty then got the important wicket of Mahela Jayawardena when he bowled the former Sri Lankan skipper for just eight.

Angelo Mathews (35 not out) and Lahiru Thirimanne steadied the innings and got Sri Lanka back on track but on 104 Thirimanne slashed at a Mitchell Starc delivery outside off stump and was caught at backward point by Adam Voges for 20.

However, Mathews played patiently and kept the scoreboard ticking over to move the Sri Lankans to within striking distance, setting the match up for Perera's big hitting at the end.

Voges was the next highest scorer with 25, while Kulasekara was the pick of the bowlers with 1-21 from his four overs.