A rejuvenated India would look for a winning start to the new season but the task would be easier said than done against a strong Sri Lanka as the two sides clash in a five-match ODI series starting here on Saturday. 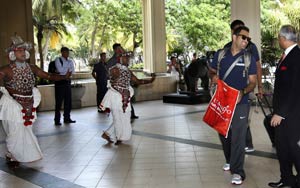 A rejuvenated India would look for a winning start to the new season but the task would be easier said than done against a strong Sri Lanka as the two sides clash in a five-match ODI series starting here on Saturday.

Barring the Indian Premier League, Mahendra Singh Dhoni's India have not been in action since their last international outing in South Africa in March.

The hosts, by contrast, have been hungry Tigers on prey. They beat Pakistan at home in both ODIs and Tests, outplaying the high-riding opponents with a clinical performance.

But India are not Pakistan and are known for greater deeds of consistency at the very high echelons of competitiveness.

The Indian captain was implying that the near two months break the players have had since the IPL would serve them well as the team aims to win the series to herald the new season for them on a happy note.

Dhoni made no secret of India's ambitions in the next tour to the emerald isle, the world Twenty20. He was happy that most of the players in the touring team would form the nucleus of the side for the world T20.

For Mahela Jayawardene and the Sri Lankans, it would just be the continuation of the good yields in the series against Pakistan.

"We have just finished a good series against Pakistan. It is now for us to build on the good work," Jayawardene said.

Like his Indian opposite number, the Lankan captain thought the series should provide a good basis to launch the world T20 campaign.

"We have got a few new players in the squad, this series would be a good opportunity for them", Jayawardene stressed.

In the Indian squad their new vice captain Virat Kohli and a solid Rohit Sharma would be the players to watch out for apart from a couple of comeback men -- opener Virender Sehwag and pace spearhead Zaheer Khan.

Vinay Kumar's injury, which put Irfan Pathan back in the squad, seemed to have silenced the argument that the Indians were lacking a genuine all-rounder in the squad.

Off-spinner Ravichandran Ashwin would also look to make an impression on the spin-friendly tracks here.

The Indians will be top heavy with Sehwag and Ajinkya Rahane firing should the 24-year-old batsman be able to extend his IPL form in to series. 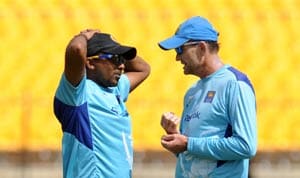 Sri Lankan fans, who would be hard done by the absence of Sachin Tendulkar, should not be short of the entertainment coming from the rest of Indian line-up which boasts of Gautam Gambhir, Dhoni and Suresh Raina.

Among Jayawardene's new guns are 24-year-old left arm pacer Isuru Udana. The youngster has only appeared in six T20 internationals albeit three years apart after making his debut in 2009. He was recalled to play the last month's T20 against the Pakistanis.

Chamara Kapugedera and Rangana Herath are the other 'comeback boys' in the one day squad.

Kapugedera has had a wretched run in the 'A' team tour of Zimbabwe which concluded yesterday. The selectors have come under flak for picking him as he had scored only 37 runs with two ducks in the four matches in Zimbabwe.

Herath, now Sri Lanka's main spin weapon in Tests, returns to the side having been rested for the final ODI against Pakistan.

Thisara Perera too has come of age as the leading all rounder. His performance against Pakistan prompted head coach Graham Ford to compare him with with South African great Lance Klusener.

He will be raring to go against the Indians and the tourists will remember him for his last over assault against Zaheer Khan in the world cup final of 2011.

The show piece Mahinda Rajapaksa stadium's location, Suriyawewa in the deep southern district of Hambantota, is among the lowest of rainfall areas.

This would mean that weather gods would not have any say, a welcome change from the rain plagued series against Pakistan. 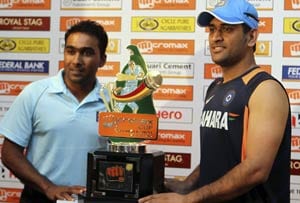