In Champions League Twenty20, There are No Easy Games: Ryan Ten Doeschate

Ryan ten Doeschate, who scored 51 off 41 balls and added an 80-run stand for the sixth wicket with Andre Russell (58 off 25 balls) was pleased with the winning start to Kolkata Knight Riders' Champions League Twenty20 campaign. 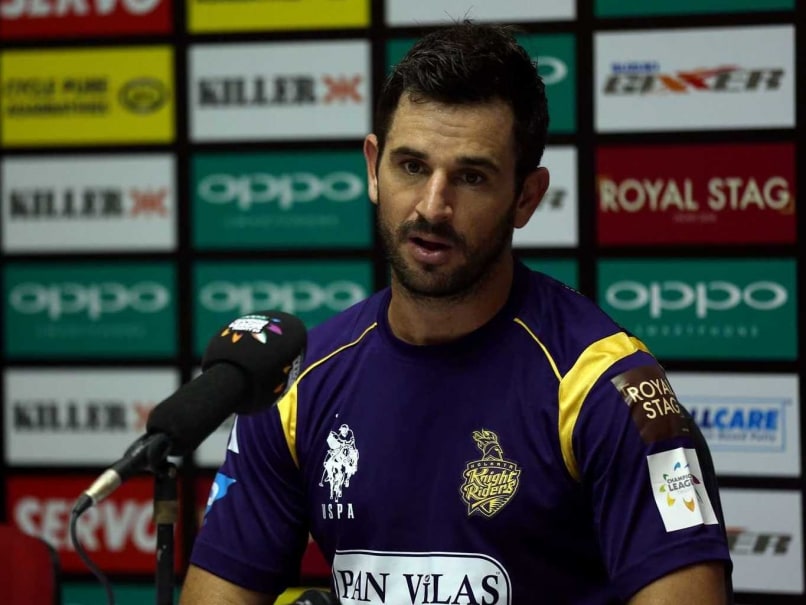 KKR's Ryan ten Doeschate speaks to the media after his side's thrilling win over CSK in CLT20.© BCCI
Hyderabad:

Kolkata Knight Riders batsman Ryan ten Doeschate heaped praise on teammate Andre Russell for taking the game away from Chennai Super Kings with a scintillating knock and felt that there weren't going to be any easy games in the tournament.

"It is the Champions League for the reason, you've got strong teams from strong cricketing nations. Obviously, Australia, South Africa, New Zealand and also India. There are going to be no easy games. So, any time picking up a win is very, very crucial," he said. (Gambhir hails Tendo-Russell's 'unbelievable' stand)

Ryan ten Doeschate said the victory is crucial for his side ahead of more competitive games in the tournament.

"It is not do or die yet. Obviously, you can afford to lose one or may be two if you've got good run-rate. Chennai are probably the strongest team in the group. So, to get this win is a nice, better start," ten Doeschate told reporters in the post-match press conference late last night.

Ten Doeschate, who struck an equally significant 51 runs in chasing the target of 158 set by Chennai, was all praise for Russell, saying that the West Indian took the game away from the rivals.

"He (Russell) just kept going. He has basically taken the game away from them in a space of six overs in a fantastic part of the knock," he said.

Ten Doeschate said he was not surprised by the power-packed performance of Russell that scripted the win against the formidable CSK.

"Not surprised. Because, we all knew that he is on the back of a very good Carribean Premier League. He had limited chances in the IPL. He did not bat particularly well during the IPL. When he is coming, he is in good form. We have seen him in the nets and the practice game this week. He has made it very nicely," he said.

Replying to a query, he said his side did not have an ideal start to their chase as they were tottering at 51 for five in nine overs with captain Gautam Gambhir, Yusuf Pathan and Manish Pandey returning to the pavilion.

"Obviously, not ideal start. We relied heavily on the batters in the IPL. So, it was a different scenario. But, I thought from the very first ball, it was a good wicket. But it is just the case of if we batted the whole 20 overs, we always have a chance of winning," ten Doeschate said.

Ten Doeschate said restricting the Chennai side to 157 played an important role and he was also happy to make a useful contribution in the victory.

"At 10 overs, I think they were close to 80. So, probably they should have got 175. Between the 10th and 15th over, the spinners, particularly Sunil (Narine) really shut it down and picking up Raina's wicket was key as well," he said.

Meanwhile, Chennai coach Stephen Fleming said his team played well but fell short in the end with Russell on a rampage.

"We played well. We may be were a little short of runs. Narine bowled a great spell. It was difficult to play the innings. So, those overs were tough.

But, with the start we had with the ball, then we had a very good chance of winning and we should have won the game," he said.

"But once again, we had one player who came off and Andre Russell played a match-winning innings. So, it is Twenty20 and we are little disappointed.

We thought we got pretty close to doing enough to win the game. But, one player setting path today was the difference. So, it is pretty much close game of cricket," Fleming added.

Ashish Nehra, who scalped four wickets for Chennai, was excellent, but the sensible knocks of Russell and ten Doeschate made the difference, he said.

"He (Nehra) was excellent. He has been bowling beautifully in the nets and he took that on to the field. So, he bowled a great spell."

Comments
Topics mentioned in this article
CLT20 2014 Chennai Super Kings Kolkata Knight Riders Andre Russell Ryan ten Doeschate Cricket
Get the latest updates on IND vs NZ 2021, check out the Schedule and Live Score . Like us on Facebook or follow us on Twitter for more sports updates. You can also download the NDTV Cricket app for Android or iOS.