Chasing a stiff target of 185, Aiden Blizzard swept the Cape Cobras away with his 48-ball-78 blitzkrieg that had four boundaries and five huge sixes as the Aussie outfit won the contest with an over to spare. 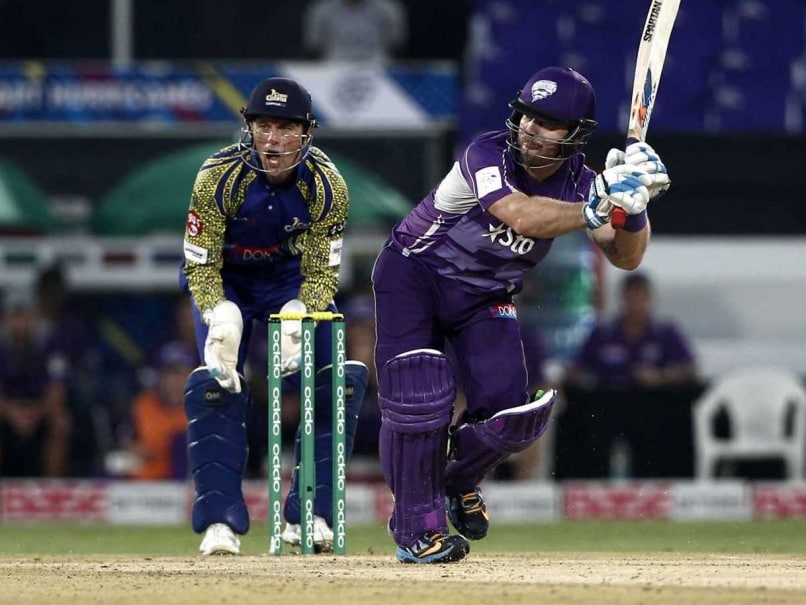 Aiden Blizzard played a blistering knock as Hobart Hurricanes beat Cape Cobras by six wickets in a group league encounter of the Champions League T20, to keep their hopes of qualifying for the semifinal alive. (Scorecard)

Chasing a stiff target of 185, 'Hurricane Blizzard' swept the Cobras away with his 48-ball-78 blitzkrieg that had four boundaries and five huge sixes as the Aussie outfit won the contest with an over to spare.

He got a reprieve in the 18th over bowled by Vernon Philander, where he was caught in the deep but the bowler overstepped resulting in a 'free-hit' being awarded to the batting team. The over yielded 24 runs including two huge sixes and four hit by the 30-year-old.

Credit should also be given to Jonathan Wells for being the ideal foil during their unbroken 65 run stand for the fifth wicket.

However credit should also be given to opener Ben Dunk, who set the stage with a 35-ball-54 for Blizzard to come and finish off the game in style.

Left-handed opener Dunk started the onslaught as he hit seven boundaries in a space of nine deliveries with three of them off Vernon Philander and four in an over from left-arm slow bowler Robin Peterson.

Such was Dunk's domination in the opening partnership of 51 that his opening partner Tim Paine scored only seven when he was castled by Charl Langeveldt.

Dunk scored his 50 off 30 balls and was finally holed out in the deep off the bowling of Sybrand Engelbrecht, having hit 10 fours in his innings.

However at 121 for four in the 15th over, Blizzard, took it upon himself to see Hurricanes survive in the tournament.

Earlier, Philander and Peterson took the Hobart Hurricanes bowlers to the cleaners with some audcaious hitting during the final overs as Cape Cobras made a commanding 184 for six in 20 overs.

Peterson struck 25 off 14 balls with two fours and a six while Philander smashed the daylights out of Hurricanes attack with a 32 off 14 balls that had five fours and a six. The duo added 52 runs in final four overs as Cobras crossed 180-run mark when it seemed they would settle for a 160-plus score.

Amla played through the line to a fuller delivery from Ben Hilfenhaus which knocked the middle-stump back.

An on-side player, Levi was severe on anything bowled on his pads by Hilfenhaus or Joe Mennie. In fact he also hit a one-handed six off Mennie over long-on as the batsman had picked the slower delivery early.

Omphile Ramela (21) off 11 balls played a little cameo as 96 came off the first 10 overs bowled by Hurricanes as Cobras also lost Levi in the process which hurt their momentum.

Overs 11-17 produced only 46 runs after which Philander and Peterson suddenly put a foot on the pedal to up the ante.

For Hurricanes, Hilfenhaus took two for 49 but the 18 runs he conceded off the last over can prove to be crucial in the final context of the match. Ben Laughlin (2/31) was the most successful bowler for the Aussie side.

Earlier, Cape Cobras won the toss and elected to bat against Hobart Hurricanes in their Group B match of the Champions League Twenty20.

Cobras have made three changes to their side, including Richard Levi, Sybrand Engelbrecht and Dane Pied in place of Rory Kleinveldt, Justin Kemp and Stiaan van Zyl.

Hurricanes have made two changes, bringing in Xavier Doherty and Joe Mennie for Evan Gulbis and Cameron Boyce.

Comments
Topics mentioned in this article
Cape Cobras Hobart Hurricanes CLT20 2014 Cricket Rajiv Gandhi International Stadium, Hyderabad
Get the latest updates on IPL 2020, check out the IPL Schedule for 2020 and Indian Premier League (IPL) Cricket live score . Like us on Facebook or follow us on Twitter for more sports updates. You can also download the NDTV Cricket app for Android or iOS.