Asked about Sunil Narine being reported for suspected illegal bowling action, Kolkata Knight Riders coach Trevor Bayliss said the development came as a surprise as he has been with KKR for the past three years. 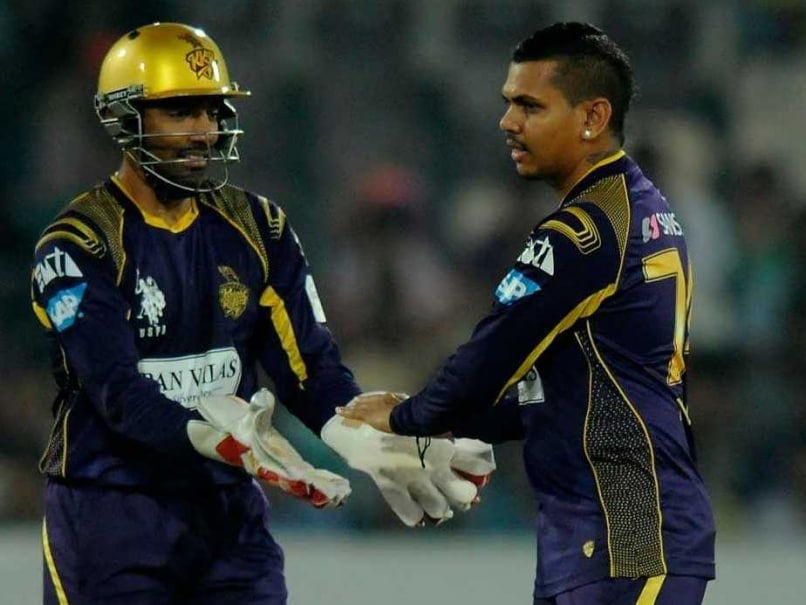 Sunil Narine (R) has the backing of his KKR coach.© BCCI
Hyderabad:

Kolkata Knight Riders coach Trevor Bayliss said that his star West Indian import Sunil Narine, who has been reported for illegal bowling action, will work his way through the tough times as he is a strong character.

Asked about Narine being reported for suspected illegal bowling action, Bayliss said the development came as a surprise as he has been with KKR for the past three years. ('KKR Riders Positive But no Room for Complacency')

"Nothing has been said over the last three years since he has been with KKR. So, it's a bit of a surprise but Sunil is a character. He is confident that it might be a problem in technique, something he can go on and work on," he said.

The KKR coach expressed confidence that Narine would be able to set things right. "He is obviously a cricketer and he has a long carrier still ahead of him, he wants to play for 10 or 12 years, he is quite happy to work on anything that needs to be worked on. I don't think it takes much for him to get it right," he said.

Observing that Hobart Hurricanes are a strong side, Bayliss said that his team is not resting on laurels and would give its best shot when they face-off in the Champions League Twenty20 semifinal here Thursday. (Gambhir Scores a Century for Record-Breaking KKR)

"It is probably a match between a spin oriented team and pace bowling team, they have some very good players, some explosive batters we will put our best foot forward and play well against them to beat them. We are looking forward to the match," he told reporters here.

KKR, the defending IPL champions, have won all the matches they played in CLT20 in the run-up to the semi-finals. It has registered 13 wins in a row so far since the IPL 7.

"Amongst the players there is no talk about 10 in a row, 13 a row whatever it is. It is a happy unit; they are all good players. Good players in a good environment are able to produce good cricket," he said.

The presence of good spinners is a definite advantage to the team. "It is one thing to play spin and another thing to play quality spin," he said.

Replying to a query, he said it doesn't matter that the semi-final match is scheduled to start for 4 PM though all of KKR's matches in the CLT20 were played in the night.

"There might be less dew. They come from Hobart which is one of the coldest places in Australia so hopefully that takes an affect as well these days, the players are used to playing at nights and playing at the middle of the day," he said.

Meanwhile, Hobart Hurricanes player Doug Bollinger said his team would like to play with confidence to make it competitive for the seasoned KKR.

"I think we just got to play confidently and try and get everything done that we set out to do," he said.

Comments
Topics mentioned in this article
Kolkata Knight Riders Sunil Narine Doug Bollinger CLT20 2014 Cricket
Get the latest updates on IPL 2021, IPL Points Table , IPL Schedule 2021 , live score . Like us on Facebook or follow us on Twitter for more sports updates. You can also download the NDTV Cricket app for Android or iOS.