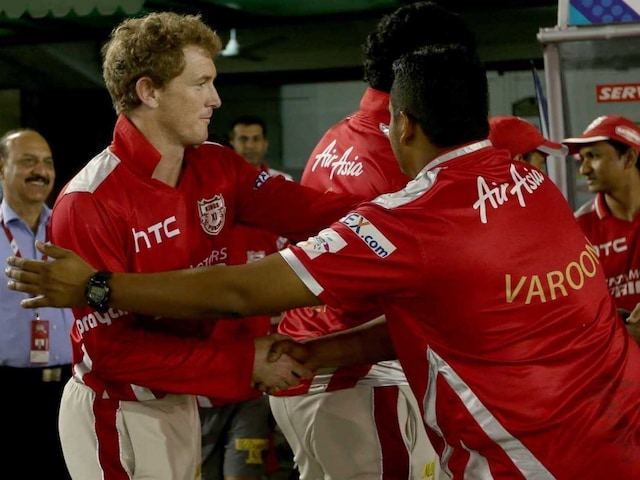 Kings XI Punjab skipper George Bailey had every reason to have a broad smile on his face as his side put up a "clinical" show, recording their fourth win in a row here on Sunday.

Punjab beat Cape Cobras by seven wickets to finish on top of Group B. (Match in pics)

"It was a good fightback with the ball and we did the job with the bat," Bailey said.

Talking about the PCA wicket, the Australian said, "It was a tired wicket, holding up a little bit and it was pretty clinical in the end."

Bailey was all praise for the young spinner Akshar Patel, who took three wickets for 15 runs and was declared Man of the Match. "He does wonderful job, he does through the innings. He contains, he takes wickets and he does it with a short sleeved shirt which is pleasing. We use him at the start and later also," he said.

"They bowl very beautifully together. I reckon he's (Patel) a little lucky tonight."

Stand-in Cobras captain Dane Vilas said they needed a better score on the board for a team like Punjab.

"We knew we had to put a big score with such a strong batting line up. We tried out best out there but unfortunately not good enough," he said.

Akshar Patel said, "I'm very happy with the captain and the management's support. I do very well in batting and bowling."

Comments
Topics mentioned in this article
Kings XI Punjab George Bailey Cape Cobras CLT20 2014 Cricket
Get the latest updates on IPL 2020, check out the IPL Schedule for 2020 and Indian Premier League (IPL) Cricket live score . Like us on Facebook or follow us on Twitter for more sports updates. You can also download the NDTV Cricket app for Android or iOS.