The reigning national champion in light-weight category Vikash Malik (60kg) beat Meder Mamakeev of Kyrgyzstan to enter Round 2 of the competition in Almaty Kazakhstan. 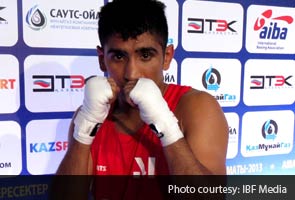 India registered their first win at the AIBA World Boxing Championship after Vikash Malik (60kg) beat Meder Mamakeev in the round one bout in Almaty, Kazakhstan on Tuesday. The railway boxer beat his rival from Kyrgyzstan as the score line read 29:28, 29:28 and 30:27.

India's reigning light-weight national champion started slowly, deciding to measure his opponent first up. His precise jabs and sharp hooks put Makameev on the back foot by the end of the second round. In the final three minutes he upped the ante to stretch his lead. The 26-year-old booked a berth in the Round of 32 of the competition as the judges gave a unanimous decision.

Malik is determined to better his international track record. However, to get into the medal rounds he will have to win three more bouts in the competition and most likely will have to upstage fifth seed and 2011 World Championship quarter-finallist Miklos Varga of Hungary. On Sunday (20 October 2013) though, Vikash will square off against Dawid Michelus of Poland for a place in the pre-quarter finals. Â