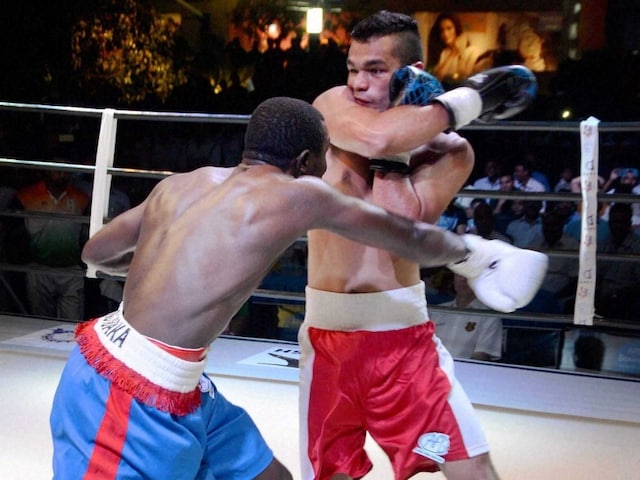 Vikas Krishan(right) during a bout with Kenya's boxer Nickson Abaka during the AIBA Pro Boxing night in Noida on Saturday.© PTI

The 24-year-old world No 6 triumphed via a unanimous 3-0 decision even though he was stretched for the entire duration of six rounds in the middleweight contest. Fighting in the bout itself was enough to assure him of a berth in the final Olympic Qualifiers next month in Venezuela but Vikas got a shot in the arm by winning the contest. The Indian pulled off the result just a night before heading to the Olympic Qualifiers in Baku, Azerbaijan, which start on June 16.

"It was very important for me to win even though it was not compulsory that I win this bout. But going for an Olympic qualifier after a gruelling win will help me. To avoid any injury, I kept my guard and fought from long range to deny him any clear shot at me," he added.

As per the rules of the International Boxing Association (AIBA), boxers have to compete in at least two AIBA pro bouts to be eligible for the final Olympic qualifiers in Venezuela, which is scheduled from July 3.

Vikas, a former World Championships bronze-medallist, is one of the strongest contenders for an Olympic berth in Azerbaijan event given that his category has five Rio tickets on offer.

Comments
Topics mentioned in this article
Boxing India
Get the latest Cricket news, check out the India cricket schedule, Cricket live score . Like us on Facebook or follow us on Twitter for more sports updates. You can also download the NDTV Cricket app for Android or iOS.