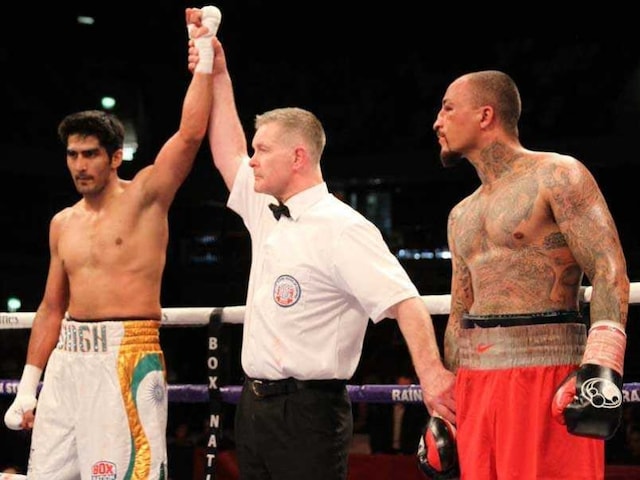 Vijender Singh will next be seen in action on May 13 in Bolton against a yet-to-be-decided opponent.© NDTV

Vijender Singh continued his unbeaten run in professional boxing with a technical knockout win over Frenchman Matiouze Royer, and the 30-year-old Indian said he was now looking forward to his next bout on May 13 before his all-important WBO Asia Title fight in India.

The referee had to stop the fight in the fifth round at the Copper Box Arena in Stratford with Royer bleeding profusely.

Vijender will next be seen in action on May 13 in Bolton against a yet-to-be-decided opponent.

"Winning my fifth bout against an experienced opponent will be helpful before my homecoming WBO Asia Title fight. My immediate target is to win sixth fight in a row which is scheduled for 13 May in UK and will be back to training from tomorrow onwards to prepare hard for it," said Vijender.

"I've got a huge Indian homecoming to look forward to this summer so it's vital I get past my next opponent in Bolton."

Royer was the most experienced opponent Vijender had faced till date. The 29-year-old Frenchman had a total of 250 rounds under his belt from 44 bouts, which included 14 wins.

However, Vijender was hardly perturbed during the six-round contest and completely dominated his more experienced opponent.

"We had a solid game plan and I stuck to it perfectly. Royer is a tough opponent and made it difficult for me at times but he couldn't handle my power and accuracy. I felt in complete control throughout the fight and it's a shame the ref waved it off, I wanted more," he added

"It felt like everything I was throwing was connecting. I'm feeling stronger with every fight and want to carry on this momentum.

The Haryana boxer was magnanimous in his win and praised his opponent for putting up a good fight.

"He showed he is a good fighter and I respect him for how he performed. But today, I was able to execute my plans better," he said.